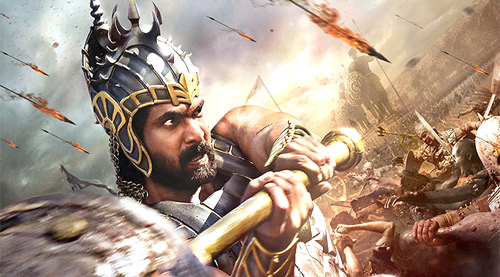 1. Son of writer K V Vijeyendra Prasad who has written Bajrangi Bhaijaan, S S Rajamouli, is arguably the most successful filmmaker of the South with a string of Telugu blockbusters to his credit including mega-hit Vikramarkurdu remade as Rowdy Rathore in Hindi. Producer Sanjay Bhansali wanted Rajamouli to direct Rowdy Rathore. Rajamouli declined due to his work in Telugu cinema.

2. Baahubali has recorded the highest ever advance booking collections in Hyderabad. Baahubali was actually going to be a Hindi-Telugu film. It's a universal story, not star-centric film. Finally it was shot in Telugu and Tamil and dubbed in Hindi.

3. Baahubali had to star the Telugu star Prabhas. Rajamouli was committed to make the next film with him.

4. Rajamouli's fascination with the theme of reincarnation started with Rakesh Roshan's Karan Arjun. Said Rajamouli, "I remember watching that film. For the first time I openly laughed and wept during a film. Earlier I was very reserved about my emotions. Karan Arjun opened up my emotions."

5. Baahubali is a period film. But not a historical. It's a folk story. And no, it's not about reincarnation. Rajamouli is done with reincarnation after Magadheera and Eega.

6. Rajamouli is very happy and proud to be known as a Telugu filmmaker. "I am glad to know my films make a pan-India impact. I see no linguistic impediment. But to make a film in Hindi would be an advantage.

7. The refrain 'Chin Ta Ta Chi Ta Ta' in Rowdy Rathore was lifted from Vikramarkurdu and used into Rowdy Rathore. Actually it was not an original tune in Vikramarkurdu either. Says Rajamouli, "My music composer M M Kreem didn't compose it. It's likeâ€¦ how do I put it? A folk tune in Tamil Nadu. It's a kind of anthem refrain among students in the State. Youngsters compose their own crude protest songs and then cap it with 'Chinta Ta Ta'. It has existed in Tamil Nadu for generations. I made it a part of Ravi Tejaa's character and then it was given to Akshay Kumar."

8. Rajamouli's favourite source of inspiration? "Amar Chitra Katha...Those comics, even today transport me into those times. I have endless fantasies revolving around those stories set in the past. My excitement with that genre translates into my films."

9. Prabhas the leading man of Baahubali spent two years of his life working on this one film. Says Rajamouli, "We worked before on Chathrapathi and we clicked very well both on creative and personal front. I needed a giant of a man with royalty personified, but with a tender heart to play Baahubali. At the start I told him I'll need one year of his dates exclusively. He smiled and said I'll be needing 2 years and kept himself free for the whole period. I don't think I could have done this with anyone else."

5 Most high-profile Covid-19 cases in…

Prabhas is the only PAN-INDIA superstar at…