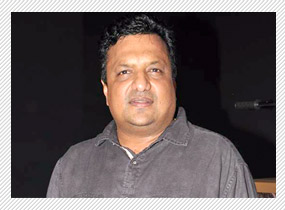 Sanjay Gupta is in a much better frame of mind than ever before. He is back to direction after a gap of six long years. His friendship with Sanjay Dutt has resumed. His baby is due in January. And last but not the least, his Shootout At Wadala is carrying excellent reports. With his personal problems sorted out and the movie career picking up all over again (he has also begun work on Khotey Sikkey), Sanjay Gupta can be found in a much happier zone and ready to face all the volleys.

Now that Shootout at Wadala is making such good progress, it must be really surreal for you, isn't it? After all, many in the industry were highly apprehensive if the film would ever go on floors.
Whatever be the apprehensions of the outsiders, the point is that between Ekta and I, there was not even a single fleeting moment where we ever had any doubts around the film going on floors. Frankly, no one was ever indispensable here. We were clear that we would make the movie irrespective of who was starring in it. Also, there was a huge support system that I enjoyed in the form of Anil Kapoor and John Abraham. Now that turned out to be one of the strong foundations for the film.

The film didn't kick-start without its fair share of controversies though. Didn't that amuse you?
(Smiles) I guess that's the baggage I come with. I don't know why sab mere hi peeche kyo padhe hue hain. People need to grow up and respect their own careers. After all, there are so many movies being made. We all can be busy in our own world, can't we?

Well, people are busy indeed. It is just that everything associated with you does make a lot of noise. Many out there do feel that it is your way of getting fair share of publicity.
Well, in true modesty, the best thing I love about myself is that I am a diehard optimist. If I am in a serious problem, I would still see the brighter side of affairs. Yes, I have been getting a lot of publicity. It could be good, it could be bad, but yes, publicity is indeed coming my way. Is publicity an enabler here? I don't know. The fact that remains unchanged though is that more the people are trying to pull me down, higher I am going up.