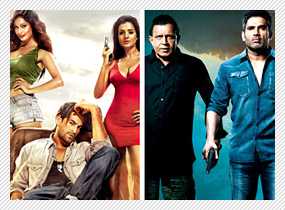 Term it as an arrival amidst the crowd, misplaced strategy or sheer bad luck but this week's new releases, Shortcut Romeo and Enemmy, have gone down the

barrel without much of a chance. Leave aside the fact that critics weren't too kind either, the fact remains that for the 'aam junta', none of the two films even managed to reach

"Both films were courting trouble like delays and censor issues for some time but what took place on the eve of release was something that no one could really see coming,"

informs a source, "To their horror, the makers realized that there weren't even adequate screens for their films. Worse, the show timings were haphazardly placed as well.

The select screens where the films were showing either placed them in a nondescript morning/afternoon show or late in the night."

a big release for itself) but also last week's Fukrey which has now turned out to be a surprise success. Since the film stayed very stable during its entire week, the

exhibitors had a task cut out for them.

"Naturally they chose a light hearted Fukrey along with Yeh Jawaani Hai Deewani which is still raking in moolah," the source adds, "It was just not possible for

action films like Shortcut Romeo and Enemmy to find any space. Also, it was too late to push the release ahead."

The phenomenon was witnessed not just in Mumbai but even Delhi NCR where the Shortcut Romeo and Enemmy got mere 25 shows in total.

"I am not saying that I was expecting crowds to be forming a beeline from the first show itself. However, those who wanted to catch it later in the day should have got an

option at the least," rues Ashuu Trikha, director of Enemmy, "If the film was running in a close by theatre, they would have watched it and formed an opinion. Good or

bad, I would have liked to hear that. In our case, there is none at all which is the most unfortunate part."

Adds a friend of Neil, "What can he do? Then they blame actors. Neil has been praised by all. But if he is not given a chance only then it can't be helped. This has really

been very disappointing for him." Ameesha Patel was a lot more vocal though. She said, "A good film was ruined because of an incompetent producer who promised Neil and

me plenty of screens and show timings. What a waste of a super product." Ironically, the 'incompetent producer' and the maker of a 'super product' here is the same man -