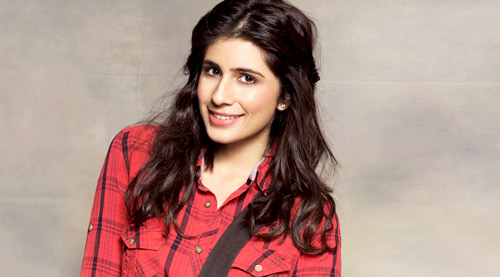 Don't be mistaken by her ultra-cute looks. This 20 something girl is much more than that. One conversation with her and you realize that while she has lived Noorie in recent

release Dil Dhadakne Do, the character isn't what she is entirely made of in real life. A thinking girl who has her eyes set on building a solid career in the world of films, she is pretty

clear about her priorities. While she can't thank Zoya Akhtar, her director, enough for getting her a noticeable launch in Bollywood, she does realize that journey from this point on would be

challenging in itself and if there is someone who has to make it successful, it is her.

Glad to you see you make an instant big impression with your very first film, Ridhima. I am sure the reactions must be overwhelming, isn't it?

The reactions are overwhelming indeed. My family is ecstatic - I am trying to curb their enthusiasm on a daily basis because I'm only one movie old and I have so much to accomplish that I really

need them to play it cool. But considering that they keep going to watch the movie every other day clearly means I'm not succeeding. I care the most about their reaction - my friends and family are

The industry response is also rather overwhelming. My biggest compliment was when Mr. Javed Akhtar told me post the screening that he thought I did a brilliant job. He was very generous with his

kind words and they are my biggest compliment till date.

While one is acting in a film, there is certainly an inkling of things going in the right direction. Still, when you actually saw the final cut of the film, were you pleasantly surprised

Yes, I was pleasantly surprised. I loved how it had all come together. It was very much true to the script and I couldn't believe how nice Zoya made me look. I really detest watching myself on

screen because I'm very critical of myself. I don't even go to the monitor once the shot is done because that's how much I dislike it. So this was essentially the first time I ever saw myself as

As an actress, you had given your all to the film, considering you came on board over a year ago. In a way, is it like a long wait indeed being worth it after all?

Yes. I think so. Although, I haven't given it my all with reckless abandonment. I would constantly harass Zoya and Co. every few weeks about what I should be doing if anything at all and it was the

fact that Zoya was clear about how the film would change the course of things for me and the quality of work coming my way that helped me stay patient. She would constantly have to tell me to calm

down. An idle creative mind is not capable of self-manufacturing such patience. Also, the other thing is that once you feel you're entitled to great cinema such as that of Zoya Akhtar's, it's

impossible to just take up anything. You're creatively spoilt.

Still, in a fickle industry like Bollywood where you don't really get second chances, how did you manage to survive the temptation of picking something else too as a backup plan?

But the industry is fickle for everyone. You're as good as your last film and that's just the nature of the job. I was less shaky because Zoya was introducing me. She's like my movie mama and that

helps with the sanity.

I don't think you can ever truly succeed at something if you aren't all in. To give myself a plan B would mean that I doubt my plan A. And I didn't want to go in with that kind of split focus. You

have to be like a horse with blinders. I am lucky to have a solid education and I guess by default that's my plan B. I know I can do anything I set my mind to. If I want to be a scientist in 5

years from now I can do it. And when you know this about yourself you have internally hedged your bets. And now I sound like some crazy arrogant person (face palms)!

Coming to the film, your performance has not just been noticed but also appreciated by one and all. Now that must have thrilled you indeed, isn't it?

I'm still trying to soak it in. I almost don't want to be appreciated anymore because the truth is that I'm just one film old. And I can't have this go to my head. I want to be the underdog for

life and kind of swim under the radar and go about doing my thing. I really think that I'm in the healing business. When you see an action or emotion on film that resonates with you and helps you

feel like you're not alone in the human experience, it heals you.

When you help tell a story that shows a mirror to society you are serving a grander purpose.

For me, acting in its purest and most noble form is like doing God's work. To reach and heal and elevate millions of people through action and emotion is the only way I know how to be my highest

self and make a noble living. Emotions are my greatest tool and I am in a profession where they are my strength and not my weakness.