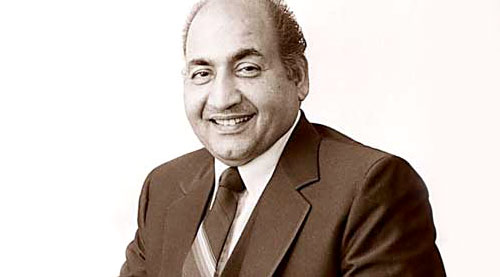 Had he lived on today, he would have still belted out the music of PK songs - with due respect to his eternal bhakt, Sonu Nigam and to Shaan - songs like the playful 'Love is a waste of time', the litany 'Bhagwan hai kahaan re tu' and the soul-stirring 'Chaar kadam', all right up Mohammed Rafi's limitlessly-versatile street. For the unique Rafi, born on December 24, 1924, would have touched a sprightly ninety today!

Composers like Shantanu Moitra of PK, Sajid-Wajid, Himesh Reshammiya and Shekhar of Vishal-Shekhar have admitted as much to his omnipresence even today in their recording rooms. While Shantanu confesses to keeping him in mind occasionally when designing songs, Himesh admits to his all- pervading completely in the earlier (decidedly more creative) stages of his career, and Wajid of Sajid-Wajid states candidly that Rafi is always there in their subconscious somewhere!

But the remark that best epitomizes this timeless legend's skills as the most accomplished Hindi film playback singer of all time - is Shekhar's statement that mention of "a Rafi style" always flummoxed him.

Says Shekhar, "There was no such thing as a 'Rafi style'. Rafi-saab could sing every kind of song!" And that was completely true! No one could make a song Rafi could not sing, and literally there was nothing he could not do. One of Rafi's earliest inspirations was the late actor-singer of the 1940s, Ghulam Mohammed (G.M.) Durrani, and with tender and loving regards, Rafi lip-synched the stunning and deceptively simple 'Unnke khayaal aaye to aate chale gaye' for the aged Durrani in his last cameo in Lal Patthar (1972).

As Manna Dey, Rafi's admiring contemporary, stated, "Rafi-saab was always busier than me because he was a better singer than me. I cannot elaborate to you why and how he was better, but because I am saying it, that is enough for you!" A warm smile followed!

Such was Rafi's versatility across songs from intricately classical to thoroughly peppy Western that he ended up doing playback in over 20 songs for his colleague and admirer Kishore Kumar on screen! About three or four of such songs became famous as well, notably, the pathos-filled 'Ajab hai dastaan teri' from Shararat and the classical 'Man mora baanwra' from Ragini under Shankar-Jaikishan and O.P.Nayyar respectively.

In fact, one such admirer was Kishore that whenever the thought a song was too difficult for him or suited Rafi more, he insisted that the composer use Rafi's voice for him and in not a single song does Rafi sound incongruous for Kishore on screen! We also have the famous example, when Kishore suggested to Laxmikant-Pyarelal and Rajesh Khanna that the cult mujra, 'Waada tera waada' be given to Rafi!

Of course, the duets in which they sang together, especially in the multi-star era of the '70s, show their perfect camaraderie as well, for those were the days of live recordings. Rafi sang most with Kishore and Manna Dey among the males, facts that explained these two titans' special fondness for him both as singer and as a human being!

Rafi's career-span was cut short only by his untimely death, at 55, in 1980. Ruling the roost from his upswing in the late '40s, till then across generational changes in tastes, actors and associates was not easy at all, but his monumental talent made it happen. But Rafi's voice, as pure nectar as someone put it, miraculously sat pat on generations of actors of diverse personalities. And behind that was a secret that his son, Shahid Rafi, revealed: Rafi made that singular effort to sound like them while remaining in sync with the song's demands and the composers' brief - a truly tough call. Says Shahid, "My father is the only singer who changed his style for actors. He would always study them and their way of speaking and enacting songs. This is the reason why he sounded different for every actor, and you could not mistake his Shammi Kapoor songs with those for Dilip Kumar."

And let us not forget that even when the hero was primarily associated with another singer, like Raj Kapoor and Manoj Kumar (Mukesh), Mehmood and Pran (Manna Dey) or Rajesh Khanna and Randhir Kapoor (Kishore Kumar), Rafi always matched them perfectly.

When times changed, Mohammed Rafi brilliantly fit even Rishi Kapoor and Amitabh Bachchan, also ending up vocalizing for Amol Palekar, Mithun Chakraborty and Raj Babbar. In fact, Rafi was last heard as late as in 1989, when 'Phool kya jawaab kya', a song earlier recorded for a shelved film, was used by the same producer in his Farz Ki Jung, with Rafi sounding perfect even for Govinda under Bappi Lahiri!

As for composers, he remained the darling of almost all the top names and the small ones as well from Naushad to Rajesh Roshan. Rafi's youngest composers include Anu Malik and Nadeem-Shravan and brothers Mandhir-Jatin - the duo that later changed into Jatin with younger brother Lalit!

But Rafi had a special place for smaller names among composers all through his career, frequently refusing remuneration from them, and remaining the ever-willing and curious student of music as he learnt songs composed by a very young Hridaynath Mangeshkar or Pandit Shivram (today's singer Divya Kumar's grandfather) to the newer Brij Bhushan, Shamji-Ghanshamji and Rajkamal among others. This resulted in a unique fact: that many of these names have their best songs - or biggest hits - with Rafi!
And just for the record, while Rafi-Lata remains the most prolific singing duo in Hindi cinema, Rafi also sang live duets with Runa Laila, Anuradha Paudwal and Kavita Krishnamurthi. Recalls Kavita, "Our duet in Ladies Tailor, 'Ab yeh jaana ke kise kehte hain' had my portion right in the end, but Rafi-saab insisted on waiting for me in the recording room till I sang my lines and then complimented me!"

"When you are in his presence, you felt as if this is a saint, not a mere human being!" is the thread of a common sentiment expressed by countless people in the industry -filmmakers, composers, musicians, lyricists, singers and recording engineers.

Rafi's sole surviving son Shahid Rafi reveals, "Dad did not want any of us to go into music. His argument was that if we thought of doing so, we should be as good as him or better as singers, and we all knew that was impossible, so none of us learnt music and we all went into business!"

This humble man's ever-gentle and God-fearing nature, however, ironically generated an infamous myth - that he was almost finished in the Rajesh Khanna-Kishore-RD wave of the early '70s. The truth, reveals his son, was that in 1970, Rafi went for Haj, and the maulanas there told him that he was sinning against Allah by singing in films. Being God-fearing, the disconcerted Rafi went directly to London (where his son was settled) and stayed there for almost six months, thinking of quitting music till his son told him, 'Go back, you were born for music.'

And from the point when he returned to his so-called 'comeback' in 1977 with Laxmikant - Pyarelal's Dharam-Veer and Amar Akbar Anthony and R.D. Burman's Hum Kisise Kum Naheen, Rafi went on to sing some of his greatest perennials, songs that included 'Aaj mausam beimaan hai' (Loafer), 'Chura liya hai' (Yaadon Ki Baraat) and 'Main jat yamla' (Pratiggya) .

There is and will be only one Rafi - the man who inspired mimics enough to keep their kitchen fires burning with 'Rafi Nites', and whose styles now are emulated by singers from Udit Narayan and Sukhwinder Singh to Sonu Nigam and beyond.

And that legend is forever, for a Rafi song is heard in the world almost 24/7. What else can be a fitting tribute to this colossus?