Mira Rajput and Shahid Kapoor are going to be parents for the second time and we definitely can’t keep calm. Shahid share a cuteness overload picture of Misha titled Big Sister yesterday and made this happy announcement in STYLE. Unlike last time, there is no secrecy surrounding Mira’s pregnancy as she is happily flaunting her bump. Just recently, we got hold of her picture where is she holding Misha’s hand as the toddler is frolicking around on the Mumbai beach. Mother-daughter duo seem to be enjoying the sunny day in the city. The serene calm surrounding them gives us an insight into the fact that Mira is a wonderful mommy. 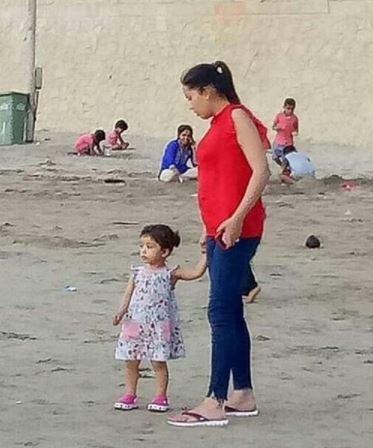 Shahid and Mira have for long hinted that they surely wanted to have one more child after Misha and there have been speculations that the Kapoors are expanding their family since last one year now. But Mira’s recent public appearances had all the tell-tell signs of an impendent pregnancy and the actor himself confirmed the same yesterday via a post on Instagram. The Padmaavat has often stated that his wife wants to flip the norm, have kids and then begin her career. Mira herself is quiet opinionated about parenting and had received flak after she dissed working moms. She had claimed that the women who are homemakers treat their kids like puppies and she is different. This was processed as an indirect dig at her husband’s ex Kareena Kapoor Khan who at the time was flaunting her bump and making screen appearances, working as usual.

Having said all that, Mira and Shahid are hands on parents to Misha and are more than keen to welcome the new addition to their family.

Shahid Kapoor gets his goof mode on for…