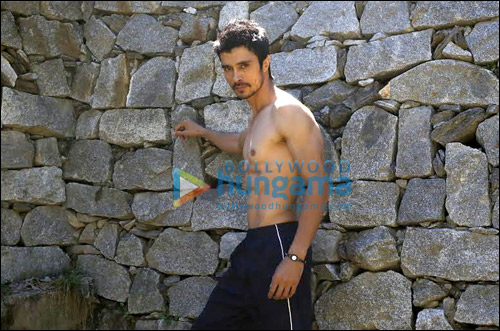 He lost 12 kgs to look convincing as the iconic boxer Mary Kom's husband Onler. But the Jat actor from Delhi Darshan Kumaar's struggle to be credible in his part has paid off.


Says the excited actor, "I had to go on a strict grilled chicken and oil-free fish protein diet for three months. I was made to have 7 small meals every day. I ended up looking so gaunt I couldn't recognize myself in the mirror. But the effort seems worth it when women come up to me to say they want a husband like me. That feels good. It means my character works within the film's context. Now I need to regain some weight as I've become too gaunt. But I want to keep my 6 packs."


Darshan made a valiant effort to look convincing as Onler. "It was challenge but I was ready for it. I've been doing theatre for ten years. My acting guru is Naseeruddin Shhah. Everything I know about acting I've learnt by watching him. At his age he is so energetic and passionate about his work. He was my inspiration for all the hard work I put in to play Onler in Mary Kom."


On Teacher's Day, Darshan showed Mary Kom to his guru. Naseer's words of praise meant the world to Darshan. "I waited for Naseer Saab to see my film. I've trained under him for ten years. What better Teacher's Day gift for me than to show my labour of love to my guru?"


Darshan says he likes to spend time with creative people. "Whether it is Naseer Sir or Sanjay Bhansali Sir just being with them is such a learning experience. I feel like a student whenever I'm with them."

Darshan is deeply excited by the response to his performance. "All the hard work seems to have paid off. I remember I had to audition in three different looks representing three different stages in Onler's character. I first had to look like the very young student besotted by Mary Kom, then the mature man who marries her. I also went through screen tests with Priyanka to see how compatible I looked with her. But finally it all seems to have come together."

The gifted young actor has also completed work on Navdeep Singh's NH10 where is cast opposite Anushka Sharma. The film was originally to star Freida Pinto. Says Darshan, "I even met Freida over the film. But then I don't know what happened. Finally it was Anushka Sharma opposite me."


Not willing to divulge much about his role in NH10, Darshan says, "All I can tell you is that I play a character very different from the one in Mary Kom, in fact quite the opposite. In NH10, I am aggressive, insensitive and insufferable. Not the kind of guy any girl would want to marry."


So who's Darshan marrying in real life? "At the moment there is no one in my life. I'm married only to my work," deadpans Darshan.


Come on, you can do better than that.