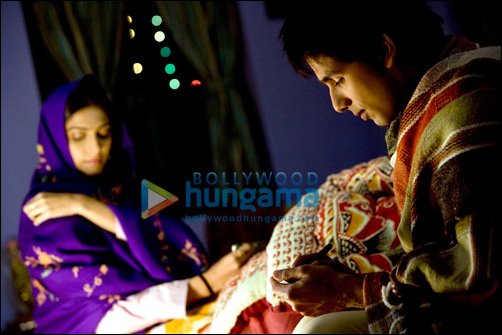 Strange are the ways of Bollywood. To make the film known, you can always trust the current blend of filmmakers and their marketing strategies. One such film is Pankaj Kapur's >Mausam, a film that comes straight from the heart!

The film has got many USPs bundled into one. On one hand, while the film has the father-son duo of Pankaj Kapur and Shahid working for the first time, on the other hand, even the film's press kit is unique in itself. It is for the first time ever that a Bollywood film is coming out with a handwritten press kit. Since, Mausam is a film for which all three, the director and both actors have worked extremely hard and have given two years of their lives, the film's makers came up with an innovative idea that everyone should write their personal journey and encapsulate their favorite moments from the film.

Insiders say that, Sonam and Shahid have both beautifully written about their journey for this press kit. Talking about this innovative press kit, Pankaj Kapoor said, "It's a marketing idea that the team has come up with. It is quiet a unique idea. Mausam is labour of love and not just a film for all of us."

With so much going for the film, one is so very excited to see the various seasons of Mausam!