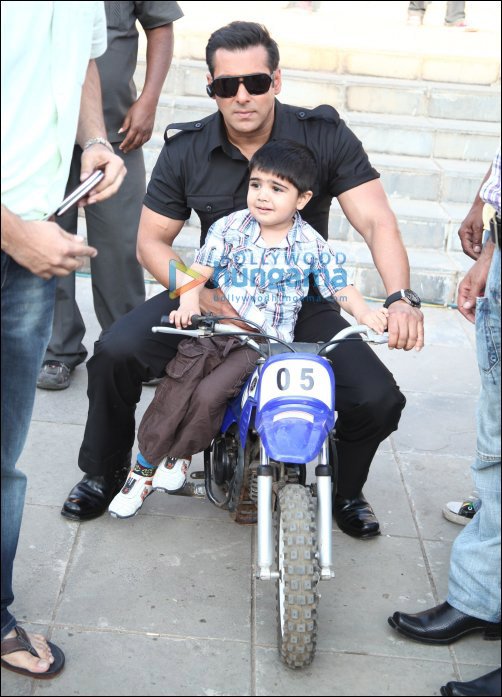 Salman Khan is one actor who surely knows how to win hearts. Apparently, the Dabangg star, while shooting for Bodyguard had a young kid waiting for him for 8 long hours with a special request. The small kid's innocent wish was that Salman should act like his bodyguard while he takes him on a bike ride, wherein the bike was actually a toy bike that runs on battery. The kid waited for hours to meet his favourite superstar Salman and ultimately managed to meet the star and expressed his wish.


Sources from the sets revealed that the little kid learned that Salman was shooting for a film in the vicinity and thus he came on his bike along with his parents to meet his favourite actor. This was not all; the child who hopped around the sets just wouldn't leave without meeting Salman and getting his wish fulfilled.


The kid waited for Salman patiently without giving up on hope. Salman was already shooting an action scene for Bodyguard and was absorbed in his character. Learning about the long wait of this young fan, he took a break after his shot and rushed to visit the kid.


Salman A.K.A Lovely Singh in Bodyguard fell in love with the boy's innocence and determination to meet him. He immediately agreed to play his Bodyguard and take him on a ride despite of his busy shoot schedule.


This probably was the happiest moment for the child and as far as Salman is concerned he went back to shooting for his year's big Eid release Bodyguard.