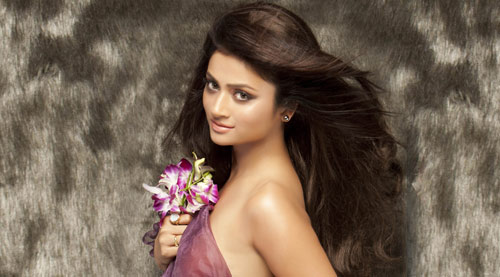 'Now who is that new face?'

This is what one ends up exclaiming on seeing pretty young woman Ankita Srivastava in the posters, promotion and other publicity material of Welcome Back. In the Firoz Nadiadwallah production which is peppered with stars as big as Anil Kapoor, Nana Patekar, John Abraham, Dimple Kapadia, Paresh Rawal and Naseeruddin Shah, one didn't really expect newcomer Ankita Srivastava to find much attention alongside Shruti Haasan. However, other than a prominent inclusion in the promotional plans of the Eros film, the Lucknow girl has also managed to make it big by also finding quite a few songs to her credit.

"It has been a beautiful journey so far, and I worked hard to reach where I am today," says the soft spoken girl, "From my childhood I wanted to be an actress. I knew though that it is very difficult to get a platform in the film industry. Obviously your talent is always there to help you but then I am a little superstitious on these matters. There is a lot of talent out there in the country and there are so many strugglers too. I feel so blessed to have got such a big role and a big film in Welcome Back."

In this Anees Bazmee directed sequel to Welcome (2007), Ankita is expected to fill in the space that was made formidable by Mallika Sherawat in the Akshay Kumar and Katrina Kaif starrer. As Rajkumari, she is playing the daughter of Dimple Kapadia, who plays Maharani.

"Well, Mallika came after the interval in Welcome and my entry is much earlier," giggles Ankita, "My character of Rajkumar is totally different. Aneesji needed a new face for the role and they did a lot of auditions with various girls. I too was one of them and then luckily I got selected. When you see the film, you would realize that an established actress wouldn't have worked for the part."

In the film, Ankita has managed to find a decent screen time, despite the presence of Shruti Haasan.

"As you can see, mine is a very playful character and reasonably performance oriented too," says Ankita, "Normally in your first film you don't get to do too much. However, since my character has lot of colors and is in a romantic rendezvous with both Anil Kapoor and Nana Patekar, it was fun, while also being challenging."

Other than spending time with Anil Kapoor and Nana Patekar, Ankita was happy to share a lot of screen space with Dimple Kapadia.

"She is a very fun loving lady and does a lot of 'masti'. I don't think she likes to be serious on the sets. I used to reach out to her for guidance for my career and she was always available. She used to tell me what to do and what not to do. She didn't have to do that, still she did. That was wonderful," gushes Ankita before signing off.