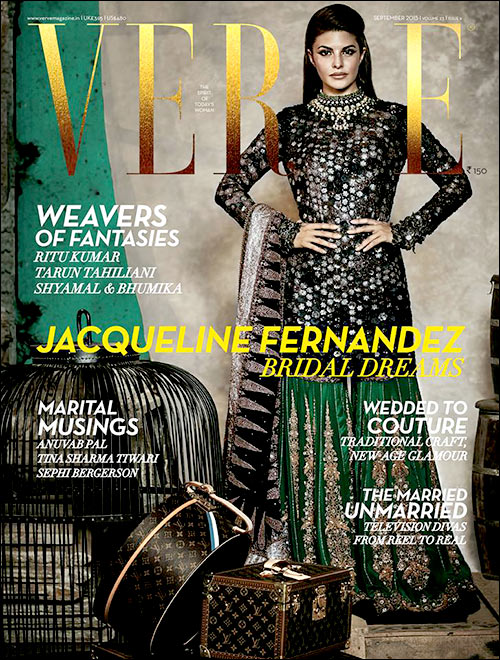 Jacqueline Fernandez seems to be the talk of the town ever since the release of her film Kick, that featured her sharing screening space with none other than Salman Khan. Following up this super successful film, she was seen in the Akshay Kumar - Sidharth Malhotra starrer Brothers,. More recently the actress who has been in the news for all the right reasons was said to be launching her own book dedicated to telling her secrets of skin care. However, away from the filmy spotlight, Jacqueline Fernandez posed for the camera lenses as the cover girl for fashion magazine Verve for the month of September.

Draped in a ravishing gown by Sabyasachi Mukherjee and Anand Kabra for Verve's bridal special with jewellery by The House of Rose and monograms by Louis Vuitton, Jacqueline looks stunning in ethnic attire. Ditching the usual Indian bridal image, Jackie portrays a rather modern outlook at being a bride who can more than live up to the tasks life throws at her.

However, if that wasn't enough the magazine also features Jacqueline as the center spread in an issue dedicated to weddings.

Jacqueline Fernandez poses with her team as…

The trauma of being Rhea Chakraborty

Disha Patani aces the butterfly kick in her…