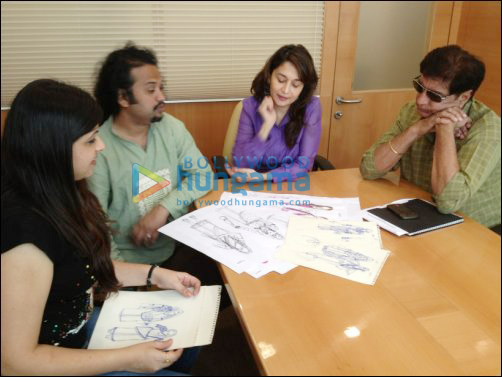 Her comeback film Aaja Nachle sank without a trace, but that hasn't deterred Madhuri Dixit Nene who is now looking forward to yet another new innings in B-town with films like Gulab Gang and Dedh Ishqiya.

Gulab Gang is about a gang of women fighting social injustice in the heartland of India where Madhuri plays the gang leader. Madhuri posted her picture during the film's costume sitting session and tweeted, "Reviewing the costumes and schedule for Gulab Gang with Soumik Sen yesterday." She later added, "Gulab gang looks way cool! Something for everyone...acting, dancing, song, and action sequences. Excited!"

Produced by Anubhav Sinha, Gulab Gang is directed by debutant Soumik Sen. The film also starring Mahie Gill and Shilpa Shukla is expected to go on floors later this year.