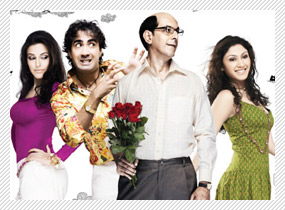 This team of intelligent cinema-savvy actors and technicians has been making urbane comedies for many years now. Some have worked at the box-office. Most have not. But there's no denying the suave smooth-sailing charm of the narration as we glide through one more metro-centric saga of warmth during times of loneliness.


Rightaway, director Saurabh Shukla, who also plays with relish an obscenely over-the-top film producer, introduces us to the film's protagonist, a struggling bald writer Shubendu (Rajat Kapoor) and his struggling-actor flatmate Gagan (Ranvir Sheroy). A portrait in contrasts , physically intellectually and morally, Shubendu and Gagan are played with such innate conviction and charm by the two actors that we barely notice how much these characters owe to the Hollywood tradition of contrasting men sharing roof and lives in a hostile city where desolation is not an option, it's a given. Deal with it, or perish.


The girls, the very charming Neha Dhupia and the surprisingly in-character Manjari Phadnis (her last remarkable performance was in Jaane Tu Ya... Jaane Na as Rajat Kapoor's daughter frozen in a state of emotional denial) slip into the film with stealthy stilettos, creating for themselves a space in the boys' story without displacing the drama of desolation that runs through the plot.


While Ranvir Shorey happily takes the backseat the core of the plot, a brilliant Mumbai fable with characters who resemble real persons without losing their cinematic edginess, is devoted to developing the Rajat-Manjari relationship which starts on the internet and moves uneasily into a personal one-to-one which threatens to turn messy.


Since I M 24 is set in the Mumbai film industry (thankfully, no one calls it Bollywood in Saurabh's film) there are some saucy references to Hindi cinema and filmmakers. In an exchange with Manjari, Rajat Kapoor playing the writer to the hilt, boasts that he wrote Devdas for Sanjay Leela Bhansali who, improvises Kapoor, wanted a departure from Sarat Chandra Chatterjee, and Rajat gave it to him. Even saucier is the sequence where Ranvir berates Rajat for mentioning the film Mujhse Dosti Karoge among the films that he feigns to have written to impress Manjari.


The joke is, I M 24 is at core, an internet romance, just like Kunal Kohli's Mujhse Dosti Karoge. If you look closely you'll come across several such delectable inhouse jokes, including a beefcake actor (Karan Singh Grover) who throws a fit when the struggling actress Neha Dhupia asks about his wife and children.


Saurabh Shukla's screenplay balances out these unsuccessful elements at the fringes of the Bollywood film industry. The script even squeezes in a rather hilarious encounter between a mafioso's timid money-collector (Vijay Raaz, as straight-faced and glum in his humour as ever) who is petrified of the producers aggressive sister (Lilette Dubey) and seeks advice and solace from the producer's secretary (Delnaaz Paul).


The vast network of Shukla's characters sit with remarkable lightness over the script. These are solidly talented actors playing fringe characters whom they closely identify with. The actors imbue a bedrock believability to this bitter-sweet Bollywood rom-com.


I M 24 has some sparkling moments of reflected glory, as a bald and bland writer Rajat Kapoor takes lessons in spunky living and convincing bullshitting from his flamboyant flatmate . What 'lies' underneath is a likeable well-crafted rom-com with many moments when the cast seems to be having a ball.