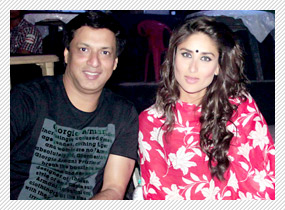 Kareena Kapoor's obsession with her Blackberry phone is no secret. She is notorious for being glued to her BBM even during her film shoots. This was also confirmed recently, by the ace filmmaker Madhur Bhandarkar who has directed Bebo in Heroine.

While talking to the press, at the first look launch of Heroine, the director shared his experience of working with the Kapoor gal. Even though he praised Kareena's acting talent at length and confessed that it was a treat to direct her, he also hinted at Bebo's short attention span and her obsession with BBM.

Raving about the acting skills of Kareena, Madhur says, "It doesn't take long to explain a scene to Kareena. She takes precisely two seconds to understand the scene." When asked why, Madhur jokingly informs, "Because after that she gets busy with her BBM." He immediately adds, "But what other actresses take two hours to understand, she gets it in two seconds."

Even though the director joked about Bebo's BBM addiction, it seems he wasn't too pleased with it. Reportedly, even Aamir Khan had banned phones on the sets of Talaash. We wonder if it had anything to do with Bebo's habit.

We know that old habits die hard but maybe Bebo can take a hint and do something to keep her irksome habit in check.