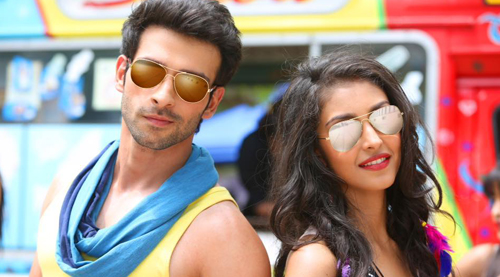 There are a couple of films that have already been reserved for Valentine's Day weekend celebrations - Sanam Re and Fitoor, both of which arrive on February 12.

However, for those looking at continued celebration of love with the one closest to their heart, there is a film which is arriving a week earlier.

It is Loveshhuda, which is now slated to arrive on February 19, and is set to be a young romantic musical entertainer of the year.

"Guess those who wish to celebrate Valentine's Day can well continue for a week later as well," chuckles Girish Kumar, the leading man of the film, "Our film does talk the language of youth and the

reactions so far have been overwhelming. We are glad to be arriving in the season of love."

It has all turned out to be a blessing in disguise though for the team of Loveshhuda. Reason being that the film was earlier slated to release in January. However, with re-adjustments in the

arrival plan to ensure the best marketing, promotion and release placement, it was decided to bring the film on February 19.

"The month of January was anyways getting way too stuffed with many releases, so it is a good thing for Loveshhuda to arrive amidst lesser crowd," says a trade analyst, "This gives the film

a much better slotting as well. The best part about the film is that the songs are doing quite well, be it 'Mar Jaayen', 'Peene Ki Tamanna', 'Dono Ke Dono Single' or 'Chitta Kukkad'.

In fact another song is set to release as well and that would further do quite well with the youngsters. A few extra weeks in hand mean the songs too would get further popular. That should only aid

the film further in the Valentine's Day season."

As for the quirky promo which promises to tell the 'epic tale' of 'a love story that started in bed', it would be interesting to see the kind of lessons that debutant director Vaibhav Misra has for

his audience in the season of love.