Charismatic tennis legend Leander Paes and ace gymnast Dipa Karmakar, both of whom have given fans reason to rejoice and made the country proud on multiple occasions, lived up the fervour and festivities in ethnic wear, bouts of banter and laughter, for the upcoming Karamveer special episode of KBC. Amitabh Bachchan took the special guests down the memory lane, getting them to recount the experience of their maiden victory, their achievements, their challenges, and their milestones. 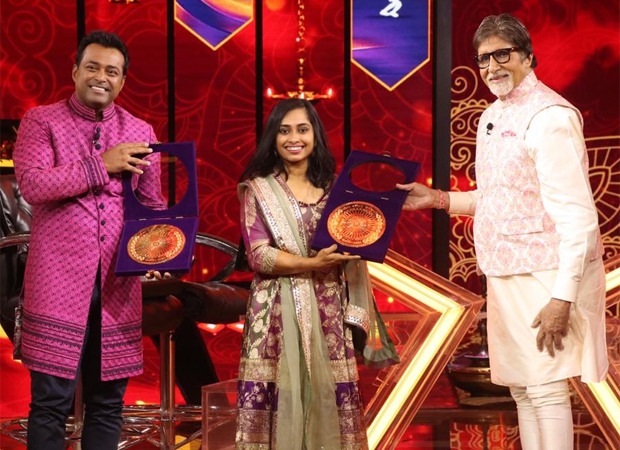 When Big B asked Karmakar if she remembers Paes winning a bronze medal at the Atlanta Olympics 1996, she quipped, "Sir, I was 3 years old". An embarrassed Paes commented, "Sir, today she made me feel really old!" A fun rapid-fire round saw Big B getting Paes and Karmakar to open up about their favourite sports personality, their cheat day meals, toughest opponents, the toughest part about the training, et al. When Karmakar was asked about her favourite Bollywood personality, pat came the reply, "Hrithik Roshan", and she quickly added "Aap toh ho hi", while Paes maintained it has forever been "Amitabh Bachchan".

The stars also had a few words of wisdom to share. "To become a champion, you have to take extra effort or else you just remain a player," Paes shared in true sportsman style. Even Karmakar spoke about how acing the Produnova Vault, also known as death vault, has been the most prized moment for her. She explained, when she had asked her coach about how she could increase her chances to win a medal, she was told the Produnova Vault could be the key, but that it was dangerous. "I did not hear dangerous. Mujhe sirf medal jeetna hai," reveals Karmakar, sharing how having the right focus in life always helps people sail through.

Also Read: Amitabh Bachchan thanks a fan who gifted him a rangoli to commemorate 51 years in the industry on KBC