About Last Night is possibly the most trending word on social media currently. The reason? Last night, filmmaker Karan Johar celebrated his 50th birthday in his own glamorous, blingy style. Amidst the star-studded bash, present were newbies like Shanaya Kapoor and Aryan Khan whereas on the other hand, we also had a list of television celebrities who were the special guests that evening. Amongst them were Arjit Taneja and Mrunal Thakur who played the leads of popular Zee TV show Kumkum Bhagya. The onscreen couple reunited off screen and were seen spending time with each other and other co-actors from the industry like Karan Wahi, Ridhi Dogra among others. 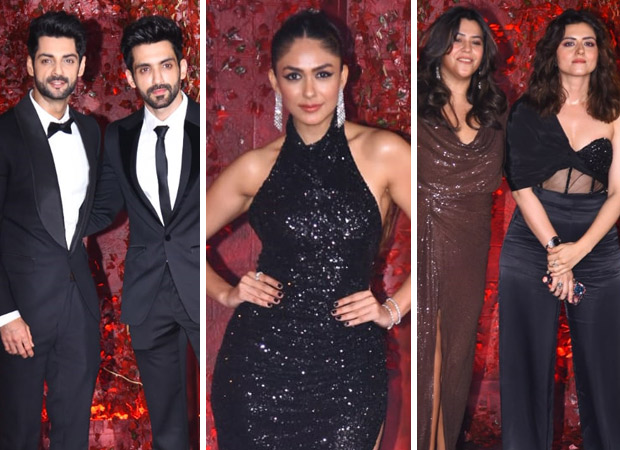 Karan Johar hosted a grand bash last evening at the Yash Raj Studios in suburban Mumbai which was attended by who’s who of the entertainment industry. We found this selfie of Arjit Taneja posing with his onscreen love Mrunal Thakur. Needless to say, it was a special moment for Kumkum Bhagya fans who were rooting for Purab and Bulbul’s love story. For the uninitiated, in the initial story of the Zee TV show, Mrunal and Arjit played the parallel leads and were a popular onscreen couple.

On the other hand, they also met with other guests and posed with their co-actors. Here’s a selfie of Arjit posing with his co-actor friends like Karan Wahi and Ridhi Dogra. While Karan has already made taken his step in Bollywood with films like Daawat-E-Ishq and Hate Story 4, Ridhi is yet to make her Bollywood debut.

Speaking of the birthday bash, the theme for the party was black and bling. Needless to say, the guests arrived with equal glitz and glamour as they sashayed the red carpet at the Yash Raj Studios. While Mrunal Thakur was all black and bling, Ridhi Dogra kept it black and stylish. Karan’s bestie and TV czarina Ekta Kapoor too made an appearance at the bash in a blingy copper coloured outfit.