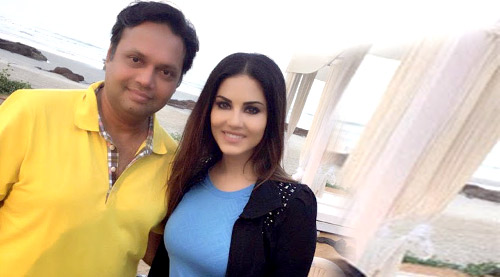 Director Devang Dholakia is working with one of the most sought after actresses Sunny Leone not in one, but two films. While Tina and Lolo, also starring Karishma Tanna, is in the making, his first film with the sexy actress, Kuch Kuch Locha Hai has already hit the silver screens this week. Though he has competition in the form of Piku, filmmaker Devang Dholakia is confident about his content considering that the film has elements of humour with Gujarati tadka and sexy Sunny Leone as the topping. Bollywood Hungama exclusively explores the journey of Kuch Kuch Locha Hai, Devang's expectation from the film and a few interesting facts about his film with Sunny.


You are doing two films with Sunny Leone but you had recently mentioned that Kuch Kuch Locha Hai will change her imageâ€¦ So what did you exactly mean by that?

Sunny is playing a glamorous Bollywood diva, who becomes a part of a Gujarati family through comedy of errors. It's a complete 'change of image' situation. It is (also) her first attempt at comedy. She has fantastic comic timing and to work hand in hand with a veteran Ram Kapoor and the other cast like Mehul Buch who are professional theatre actors, it was really superb of her.


How was it working with Sunny Leone?

She is very professional. She is someone who comes on time to the sets and learns her lines really well. It was a pleasure working with her.


When you decided to make this film... was Ram Kapoor always on the list?

Yes, I wanted to approach Ram for the role. I had seen Udaan and Agent Vinod where it was a small role along with his other TV shows, but after seeing these (films) I realized that he has the kind of acting capabilities that very few have. He was the first (choice) to play a middle aged Gujarati man who falls in love with a Bollywood diva, thereby proving it to other men that you can date someone like Sunny Leone once in your life.


How will you define the other characters in Praveen Patel's crazy world?

His wife is someone who only cares for God and religion, and is a great Gujarati 'bahu'. His son Jigar is a sort of a rebel who has a rock band, and is in love with his neighbor Naina played by Evelyn Sharma. In the script, Praveen Patel lies to Shanaya that he has got parents at home because Shanaya has to learn from a Gujarati family for her character. Since his friends ditch him at the last moment, Jigar (Navdeep) and Naina pretend to be his parents. In exchange for that, Jigar and Naina ask Praveen to agree for their marriage. Also, there is a Gujarati and Parsi gentlemen named Virji and Naozar, who are best of friends and are known for hiding things from their wives. The characters in the film are quirky and contemporary.


Kuch Kuch Locha Hai has Sunny doing a Dimple Kapadia number 'Jaane Do Na' in a red sareeâ€¦ What inspired you to remake this Asha Bhosle classic?

For this man (Ram Kapoor), it's all about dating an actress. So he sees Sunny playing various avatars like Marilyn Monroe, even in the song 'Daaru Ke Peeke', there is a Madhuri Dixit avatar, in one of the parts of the song there also a Helen avatar of 'Mungda'. He also thinks of her in this kind of avatar, of how he dreamt of these actresses when he was young because his wife Kokila doesn't give him that glamour but only simplicity and foundation of marriage. Moreover, it ('Jaane Do Na') has been my personal favourite.


How was it working with newbie Navdeep Chabbra and the very pretty Evelyn Sharma?

Great! Navdeep is learning the ropes very well. He is a very nice dancer and a good looking boy. Evelyn and Navdeep's pairing is great. It has really worked well for me and now it is for the audiences to react how they are looking as a pair. There's also a romantic number with them. Also, Jigar (Navdeep) and Praveen (Ram) are kind of complete anti (opposites) because one is a rebel musician and the other is a Gujarati businessman.


What are your expectations from the film?

I hope people go to watch my film. I hope that they like the quirky pairing of Ram Kapoor and Sunny Leone, the quirkiness of this whole Gujarati family. For me, the unique pairing is the main thing because, if a middle aged man dreams about a person, he is not interested in sleeping with her. But he is just overwhelmed by meeting her and the 'star struckness', being with a Bollywood diva. That's why it's a family thing. It's an entirely different obsession for a man.


What would you want the audience to look for in Kuch Kuch Locha Hai?

It's a nice, fun filled, comedy and you will come out smiling, and that's my mantra for this film. I want you to go in with a smile, have your popcorn, sit in the seat and come out with a smile. I have been a big fan of Hrishikesh Mukherjee and I wanted to do something like that. If you have seen films like Chupke Chupke, Rang Birangi, there, the circumstances lead to things. It's a very simple story, simply told and not too many gimmicks.


Tina and Lolo is your next. What do you have to say on that?

That's a completely different genre. It is an action thriller film with adventure and two women on the run. A journey and a film on bonding. Sunny Leone and Karishma Tanna have undergone a lot of training for the film. Not much of combat or anything like that, but the gun classes and others. The film has more of Bollywood kind of action. They (Sunny and Karishma) are not trained, but circumstances teach them how to fight with people.


Will we be seeing her with a hero in that film?

There is an ensemble cast with men too but I can't reveal too much about it. All I can say is that there is no hero.


Are you helming a black action thriller with Ram Kapoor and Sunny Leone in the lead? When will it go on floor?

We are still in talks at the moment. The script is still being finalized. We are speaking to each other but nothing has been signed as yet.