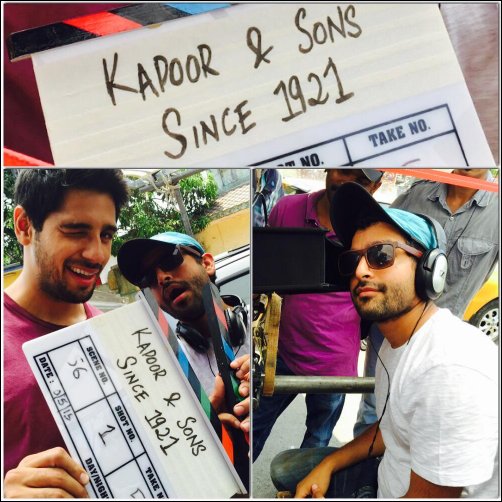 Karan Johar's proteges Sidharth Malhotra and Alia Bhatt have finally kick started their next film together titled Kapoor & Sons. A few months ago, in order to put

speculations to rest, Karan Johar had taken to Twitter to announce about the film to be directed by Shakun Batra. The film has finally gone on floor this Sunday along with two names added to the

Posting about the first day shoot on Twitter, Alia Bhatt posted a collage of the on the sets fun on her Twitter handle, saying, "Kapoor & sons beginsss !!! Wish us luckkkkk ;) wohooo @karanjohar

On the other hand, Sidharth Malhotra shared a funny picture of their director Shakun Batra holding a clapperboard saying, "Day 1 of #kapoorandsons wish us luck people @shakunbatra @aliaa08

@_fawadakhan_@chintskap @karanjohar". Interestingly, Fawad Khan, who debuted in Bollywood with Khoobsurat, has collaborated with director-producer Karan Johar for the first time while the

multi-talented filmmaker launched Sidharth and Alia in the industry with his production Student Of The Year.

Siddhant Chaturvedi reveals how he has been…