Well, another season of the Karan Johar‘s show Koffee With Karan has come to an end. The season 6 started with two leading ladies Alia Bhatt and Deepika Padukone and has come to a close with the stunning divas Priyanka Chopra and Kareena Kapoor Khan. After starring in Aitraaz and years of rumours of being frenemies, the two of them came together for the first time together in the finale of Karan Johar’s chat show and it was fun to watch these two divas get along. 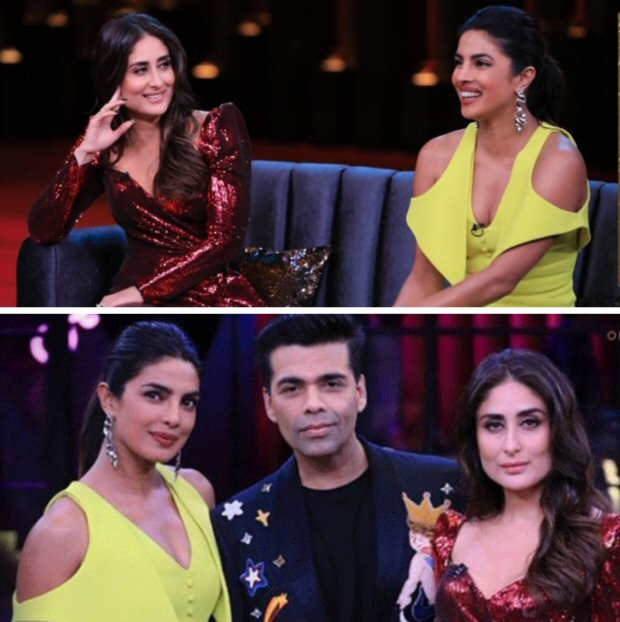 Here are some of the highlights from the entertaining grand finale:

While Kareena Kapoor Khan has admitted several times about her relationship with Shahid Kapoor in the past, Priyanka Chopra never has gone on record that she was ever in relationship with her Kaminey co-star. Speaking of the elephant in the room, Karan Johar started the conversation with the addressing the rivalry between the two actresses in the past and whether it was due to Shahid. Priyanka said that over the years the two of them have evolved a lot. “I think we didn't really know each other. By the time we started spending time with each other and getting to know each other, we really get along. Till we didn't know well, we had this weird energy,” Priyanka said.

While Kareena admitted about her ex Shahid, Priyanka still did not accept about her relationship with Shahid. But, she did reveal that once she had gone on a trip to Bali with Kareena, Shahid and a group of friends. Karan made fun of Bebo stating that at the time, Kareena was vegetarian and spiritual.

The new couple of tinsel town Malaika Arora and Arjun Kapoor have been reportedly dating for a while before going public couple of months ago. While PeeCee has been away a lot, she admitted she is most of the times clueless about the ongoings of the film industry. When Kareena reprimanded her for not knowing about her roots anymore, Priyanka was like she did know about Malaika Arora and Arjun Kapoor's relationship but wasn't aware who is Varun Dhawan dating. When Karan asked Kareena whether she will be the bridesmaid in Malaika's wedding, she was stunned and didn't answer the question.

It is known that Kareena Kapoor Khan is Saif Ali Khan's second wife. He has two kids Sara Ali Khan and Ibrahim Ali Khan from his first marriage to Amrita Singh. Sara has often admitted sharing a lovely bond with Kareena. During a candid conversation, Kareena opened up about her bonding with Amrita Singh and revealed, “We've never met but I have the utmost respect and regards for her. I met Saif many years after he got divorced. So, it was not on anyone's time. He was clearly single.”

Ever since Taimur Ali Khan was born, the paparazzi has been taking keen interest in the cute toddler. And now that he is walking and waving back at the shutterbugs, his popularity is only increasing immensely. He even says media everytime he sees cameras. When asked about the growing popularity and the dolls that are being made of Taimur, Kareena sassed back saying, “I'm sorry to say that looks like Chucky the doll and doesn't look like Taimur Ali Khan, at all...It has some strange blue eyes, some scruffy hair and bandhgala that does not make him my son.”

She further said, “He waves back because he understands that everybody calls him -Taimur, Taimur. He is a friendly child. But of course, we are very scared about it. I can’t stop him from going out. I can't stop him from going to playschool. I can request the papz to not take his picture.”

Both Kareena and Priyanka were proposed in Greece

Kareena Kapoor Khan and Priyanka Chopra revealed that they were both proposed in Greece. Kareena revealed she was shooting for ‘Chaliya Chaliya’ and next morning he simply asked her that 'Let's just get married’ even if it's a church or anywhere.

Priyanka, on the other hand, was proposed in Greece after only two months of dating. She took a good 45 seconds to say yes as they were in a very new relationship. She even confirmed that Nick Jonas indeed had shut down the Tiffany & Co store to buy the engagement ring for her.

Priyanka Chopra on her lavish wedding to Nick Jonas

Priyanka got married to Nick Jonas in the first week of December 2018 following both Christian and Hindi rituals. When asked about embracing each other's cultures, she said, “They are like four brothers and wives and their children. It's culturally different, but they are so embracing. For me, it's culturally different when I go with his family and do Thanksgiving. Initially, it was for fun but now it's important. Things like that I am also learning. Two people just want to be together and I adorn his family. I love his mum.”

Kareena on Sara Ali Khan and Kartik Aaryan as a pair

Sara Ali Khan, during her KWK debut, admitted that she would love to date Kartik Aaryan. When asked about the same to Kareena, she said, “Kartik is wonderful. Sara and KArtik willmake a good pair. They are planning to do a movie together. He is massy, she is classy.”

During the rapid fire round, Priyanka Chopra was asked who does she prefer working with more - Sanjay Leela Bhansali or Vishal Bhardwaj. She said both and also revealed that she is indeed in talks with both of them for forthcoming projects.

While Priyanka Chopra took away the coffee hamper, Kareena Kapoor Khan won the quiz round. All in all, the season came to an end with a bang.