Last Updated 08.12.2022 | 7:43 PM IST
feedback language
follow us on
Bollywood Hungama » News » Bollywood Features News » Koffee With Karan 7: Kriti Sanon reveals why her mother did not want her to star in Lust Stories: ‘She was not comfortable with the nature of the script’

In the ninth episode of Koffee With Karan 7, the couch brought together two stars who started out as debutants together but have now carved a niche for themselves. This week, Tiger Shroff and Kriti Sanon graced the couch who debuted in Heropanti and are starring in Ganapath. During the conversation, the filmmaker informed that Kriti Sanon had said no to Lust Stories and the actress revealed why her mother was a little uncomfortable with the story. 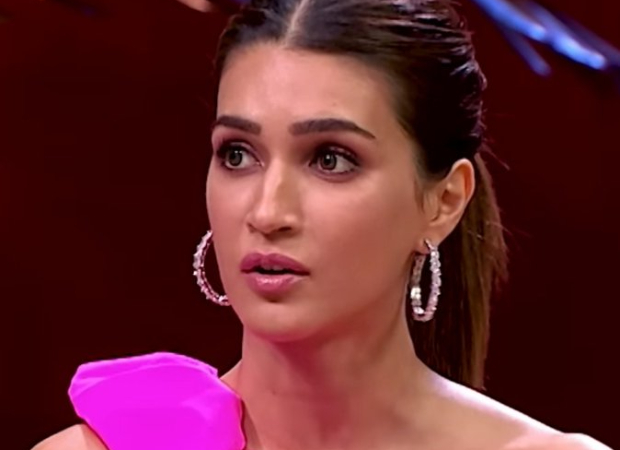 Koffee With Karan 7: Kriti Sanon reveals why her mother did not want her to star in Lust Stories: ‘She was not comfortable with the nature of the script’

Talking about her mother Geeta Sanon, Kriti said, "My mom said no to your role because she was not comfortable with the nature of the script, given the focus of it was only on sensual scenes. That is why she said better not to do it."

She further added, "I come from a middleclass family and for them, controversial themes like these can be a little shocking. But I don't always ask my mother."

In the previous episode which had Kiara Advani and Shahid Kapoor as guests, Karan Johar revealed he had hard time casting the leading lady in the short film of the anthology. The story was about a newly married couple starring Vicky Kaushal and Kiara Advani. In the film, the character Meghna had an orgasm in front of the whole family. The role was like a second innings for Kiara and completely changed the game for her in the industry with her now becoming the go-to leading in every big project. Karan said, "I had offered it to Kriti Sanon, the role and she said that her mom didn't allow her."

Karan continued, "I thought everybody's mom would stand in line, not allowing their daughters. It's actually a very empowering story. It's about a woman's right to pleasure. So I met Kiara at Manish Malhotra's house, and I just saw her, I knew her of course, I knew her as Alia Advani then...so I met her and I asked can you come tomorrow and meet me, it's for a short film. She came and she heard it and then she was a little zoned out.

On the work front, Kriti Sanon has Bhediya with Varun Dhawan, Ganapath with Tiger Shroff and Shehzada with Kartik Aaryan.

ALSO READ: Koffee With Karan 7: Karan Johar asks Kriti Sanon if something is brewing between her and Aditya Roy Kapur: 'We caught the canoodling in a corner'