Last Updated 29.11.2022 | 12:41 PM IST
feedback language
follow us on
Bollywood Hungama » News » Bollywood Features News » Koffee With Karan 7: Karan Johar asks Kriti Sanon if something is brewing between her and Aditya Roy Kapur: ‘We caught the canoodling in a corner’

In the ninth episode of Koffee With Karan 7, the couch brought together two stars who started out as debutants together but have now carved a niche for themselves. This week, Tiger Shroff and Kriti Sanon graced the couch who debuted in Heropanti and are starring in Ganapath. During the conversation, the filmmaker asked Kriti Sanon about her relationship status and whether she is seeing Aditya Roy Kapur, by any chance. 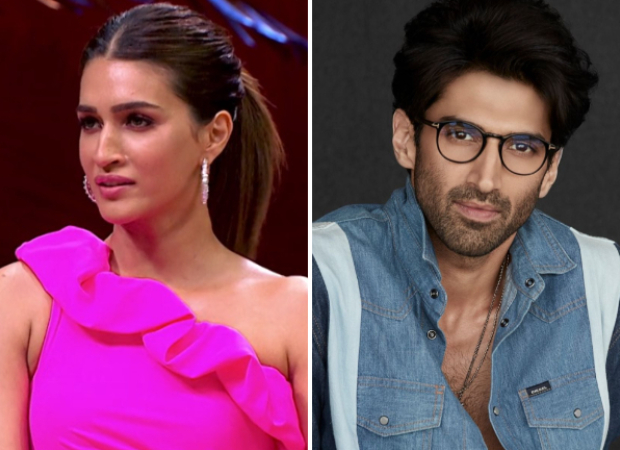 Koffee With Karan 7: Karan Johar asks Kriti Sanon if something is brewing between her and Aditya Roy Kapur: ‘We caught the canoodling in a corner’

Karan Johar asked, "Kriti you have been single for a while now, Is there anybody? There were rumours, I mean it came from...Somewhere in my party that Oh Kriti Sanon and Aditya Roy Kapur look so good together. We caught the canoodling in a corner, as in chatting." Kriti responded by saying, "We do look good together but you know me, I don't canoodle in a corner but yes, we were talking and he is a fun guy to be around. There's not been anything else."

During the rapid fire session, KJo asked Kriti, "One reason you would date Aditya Roy Kapur," She said, "Because this whole Koffee couch wants me to date him. That's the reason I would date him and he's very hot. One reason I wouldn't date Adi...I think our music sense will not match. I don't think he'd like Punjabi songs at all." Karan asked Kriti, "And that would not work for you?" she replied "So he needs to update his playlist then."

On the work front, Kriti Sanon has Bhediya with Varun Dhawan, Ganapath with Tiger Shroff and Shehzada with Kartik Aaryan.