The sixth season of Karan Johar’s popular chat show, Koffee With Karan, has seen many interesting guests on the show. From Alia Bhatt – Deepika Padukone to Team Baahubali with Prabhas, Rana Daggubati and SS Rajamouli, it has been an eventful show till now. Joining the long list of these actors who have made their debut on KWK are none other than Luka Chuppi pair Kriti Sanon and Kartik Aaryan. The duo is set to appear next Sunday and the promos look helluva entertaining. 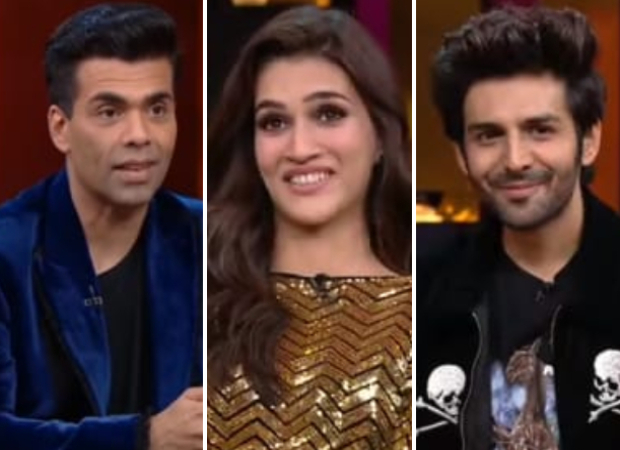 In the promo, Karan Johar is shocked to know that both his guests Kartik Aaryan and Kriti Sanon had a background in engineering before joining the film industry. When asked a recent film you could have done better in, the Pyaar Ka Panchnama actor says AndhaDhun. When asked a lie he can say without a batting an eye, Kartik quips, "That I could have done better in AndhaDhun." He even seems to be shocked when Karan mentions that Badshah called him overrated.

In another promo, Karan addresses the elephant in the room and asks him, "Are you interested in Sara Ali Khan?" Kriti quickly adds, "Have you sent her your address?" This leaves Kartik completely puzzled.

On the work front, Kartik Aaryan and Kriti Sanon are coming to together for the first time for Dinesh Vijan’s production, Luka Chuppi. The film revolves around a couple who start living together while making their families believe that they are married to hide their live-in relationship status. Directed by Laxman Utekar, the film is set to release on March 1, 2019.