Koffee With Karan season six is soon to end and this week’s episode was one of the best one we had so far because it featured Luka Chuppi stars Kartik Aaryan and Kriti Sanon for the very first time. They were funny, unabashed, cool and full on entertaining at the same time. There were disclosures about their dating life and lots of revelations about what they think of other actors and well, NEPOTISM! If you have missed today’s episode, here are the highlights. We got you covered. 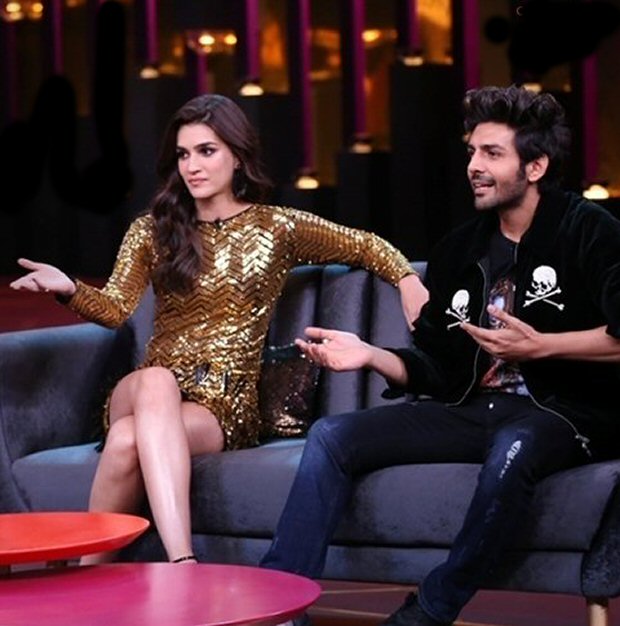 Kartik Aaryan impressed us with his totally filmy story about making it big in the industry having come from a total non-Bollywood background. Did you know? He shared 2 BHK rooms with 12 boys in Andheri before he made a breakthrough as an actor in Pyaar Ka Punchnama and he faffed his way through an engineering college in Navi Mumbai only so that he could get to all the audition calls in the city.

Unlike Kartik, Kriti was very much clueless about the whole glam world. She was studying engineering where she just happened to click a few pictures of herself in the house and upload them only to win a modelling contest. She won a contest to get a portfolio clicked by Dabboo Ratnani. There was no looking back for her since then.

.@KritiSanon sheds some light on how she became one of the most talented newcomers in the industry! #KoffeeWithKaran #KoffeeWithKartik #KoffeeWithKriti pic.twitter.com/8afsIYLMi6

3. Why Kartik Aaryan is NOT asking out Sara Ali Khan

Kartik Aaryan was finally asked by KJo about what was going on with Sara Ali Khan after all. He said that he is trying to earn money so that he can match up to her financial status, referring to the joke that Saif Ali Khan had made on the couch about how any man with money can just ‘take her’. He also spoke about a movie date with Ananya Panday and revealed that Shraddha Kapoor was just a friend.

Kriti Sanon revealed that she was just really good friends with Sushant Singh Rajput and there was NOTHING going on between them but she also took a coffee shot in a later segment to reveal that she has LIED on the couch! Karan revealed that Aditya Roy Kapur found Kriti Sanon very cute and he tried to set them up. BUT NOTHING HAPPENED SO FAR.

5. Young outsiders breaking through Vs. Nepotism

When confronted with the question of nepotism, both the actors agreed that they have had it rough to make it big and someone like Varun Dhawan, Alia Bhatt, Ranbir Kapoor, Sara Ali Khan get recognition pretty easily. But they said that they don’t have anything against anyone.

Karan asked Kartik Aaryan about Love Aaj Kal 2 and he denied it. But yes, he said he would love to work with Sara Ali Khan. Karan then asked him what does he think about working with both Sara and Ananya in the same film. Kriti interjected and claimed that it would be called Love Aaj Idhar Udhar.

The rapid-fire round was won by Kartik for being totally sharp, witty and on point!

ALSO READ: Koffee With Karan 6: Kriti Sanon asks Kartik Aaryan whether he has given Sara Ali Khan his address