Karan Johar's show Koffee With Karan season 6 is getting interesting with every episode. This coming Sunday, one will get to see the modern day heroes- Ayushmann Khurrana and Vicky Kaushal - making their debut on the entertaining show. The actors are all set to bringing their charm on the coffee couch and have made some interesting revelations already. 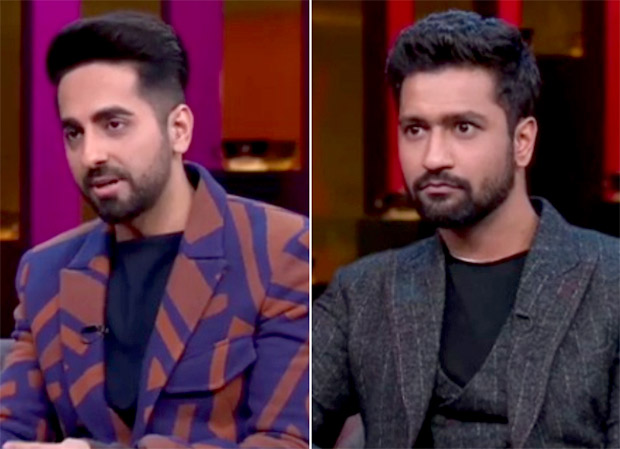 In one of the promos, Ayushmann Khurrana revealed an interesting detail related to his debut film Vicky Donor that left every surprised. When Karan Johar asked if he had donated sperms for real, he responded saying, “I have donated sperms for real and after I told this to director Shoojit Sircar, he fell off his chair.” For the uninitiated, Ayushmann played the role of a sperm donor in his debut film, Vicky Donor.

When asked the same question to Vicky Kaushal, he said no as Ayushmann teased him that he is a nice boy.

In the teaser, Karan revealed that Katrina Kaif wanted to work with Vicky Kaushal and they would look good together. In his reply, he pretended to faint when he heard Katrina's compliment.

This year has been stupendous for both Ayushmann Khurrana and Vicky Kaushal. Ayushmann delivered two hits in the same month with AndhaDhun and Badhaai Ho. Vicky saw success on digital platform with Love Per Square Foot and Lust Stories and on big screen with Sanju and Raazi.