Koffee With Karan season 6 has started and it is blazing hotter than Diwali's firecrackers! In the third episode of the season, host Karan Johar called Aamir Khan to share couch with him and answer a brand of steamy questions. Well, we loved the fact that Aamir was pretty honest with KJo from the start on his decision of gracing his show in the first place! He said plainly that he is only using the Koffee platform for promoting his movie. With Aamir in the picture, there was little scope for banter as the conversation gravitated towards MeToo movement, future of Thugs of Hindostan and of course the series of games the boys played. Here's everything you need to know about the episode right here. 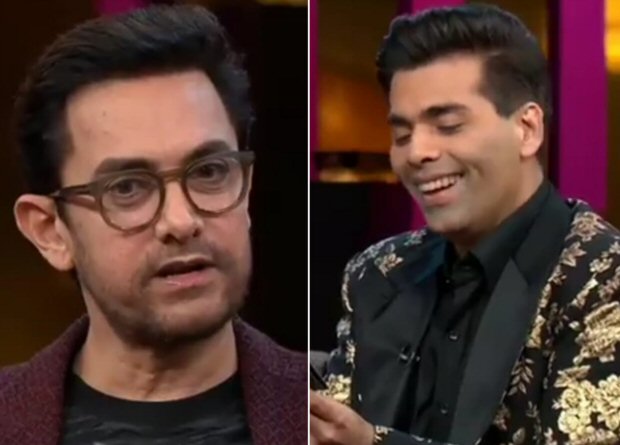 1. Real reason why Aamir Khan is nervous about Thugs of Hindostan

Aamir revealed that though there is a lot of pressure on him to perhaps overthrow Baahubali collections at the box office, he is unsure about Thugs Of Hindostan because it has no message to give. Speaking about his character he said, “It's an out and out commercial character. He is the kinda guy you would love be around with but not be his friend because he can't be trusted.” He also recalled he had a lot of fun shooting the movie and was totally starstruck in the presence of Amitabh Bachchan.

2. Aamir's HONEST take on the Me Too movement

Aamir Khan and Kiran Rao have publicly stated that they will not be associated with anyone who is proven to be guilty in the ongoing Me Too movement. He told Karan that he will go with what he hears from the victims and if there is a reason to doubt a person, then he will NOT engage with him whatever the consequences will be. He also said that he takes the burden of finishing up someone's career on being wrongly accused of sexual harassment but he won't ignore an allegation.

Aamir Khan single handedly won the coveted Koffee Hamper after he answered one question which made judge Malaika Arora and Karan Johar go completely zip zap zoom! He was asked if he was in a deep sea with Salman Khan and Shah Rukh Khan, who would he rather push? Aamir replied Salman because well, Bhai Kabhi Dubenge Nahi. Get it, get it?

Well, he also revealed in the rapid fire questions that Shah Rukh would borrow smokes from him and Salman would just come home and take what he wants and leave! Now, that shows how thick he is with both Salman and Shah Rukh.

Okay, so let's get this straight. Karan Johar cannot keep a secret. He has been tom-toming about Malaika Arora's dating game and impending marriage on the sets of India's Got Talent and he did the same on Koffee With Karan platform. He called his good friend Malla to judge a segment and got up to receive her along with Aamir. He said exactly this while doing the same: we will soon walk you up to the aisle like this! She blushed and said, ‘oh shut up Karan!’

In the rapid fire round which Karan Johar took for the first time, he was asked to name a celeb for which #TooHotToHandle hashtag is apt. He first said Deepika, then said Katrina and then bit his lip. Well, his choice was clear as he went ahead with Deepika.