Kartik Aaryan and Kiara Advani are busy promoting their film Bhool Bhulaiyaa 2. With 8 days left for the release of the film, the duo set out to Ahmedabad in the state of Gujarat to promote their upcoming film. While promoting the horror-comedy, the two actors also got the chance to relish some local cuisine. 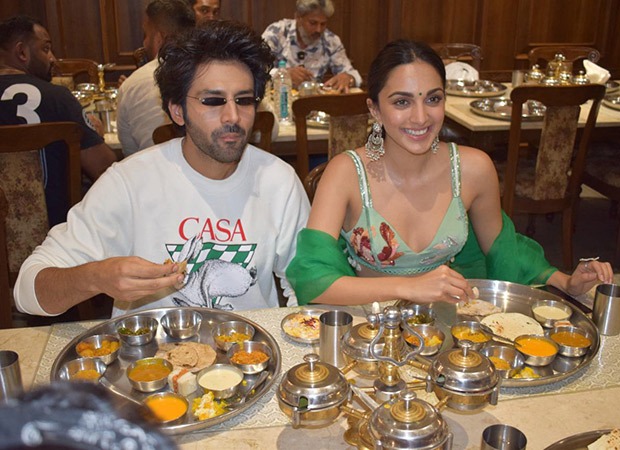 Kartik and Kiara were seen gorging on delicious-looking Gujarati traditional thali during their visit to Ahmedabad. For their trip, Kartik opted for a white sweatshirt while Kaira looked gorgeous in a green lehenga. They had their meal at Mahendra Thaal in Ahmedabad.

Earlier, while interacting with the media, Kartik Aaryanhad revealed what made him sign Bhool Bhulaiyaa 2. He said, “The character has a naughtiness, which I associate with also. So I could relate to him. His name is Ruhaan and he’s known as Rooh Baba. It’s a character you’d find amongst your friend circle. And there’s another factor, which I can’t talk about.”

Directed by Anees Bazmee, Bhool Bhulaiyaa 2 also stars Tabu and Rajpal Yadav. The film is a sequel to the 2007 blockbuster starring Akshay Kumar, Vidya Balan, and Shiney Ahuja. However, the second part is a completely new story with new characters. The film will be released on May 13.

ALSO READ: Bhool Bhulaiyaa 2: Kiara Advani talks about a HILARIOUS prank played by Anees Bazmee on her and Kartik Aaryan while shooting a scene involving a charpai in the SPOOKY haveli