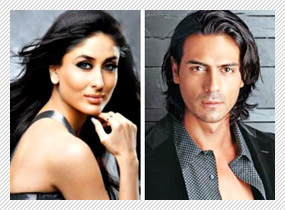 He was the villain in Kareena Kapoor's life when they last came together in Ra.One. However, Arjun Rampal has also played her hubby in We Are Family which was not too long ago. Now that they have come together in Heroine, it is apparent that even though Kareena has played the central protagonist, Arjun has managed to get a good share in the film.

However, Arjun admits that to begin with he was a bit apprehensive to be stepping into the film.

"See, when I was actually approached for the film, I did feel that in a film about a heroine, what would a guy actually do. However, the part of this superstar that I am playing in the film came across quite nicely. Moreover, Madhur and I wanted to work together for a long time. When he told me that there was this part in the film that he really wanted me to do, I went with the flow. Add to this, the fact that UTV was backing the film and I was all the more assured", reasons Arjun.

He goes on to add, "I think Madhur is really capable of handling a subject like this. I didn't have to think much about just my own character since the film is not about one particular individual. It is about a unit coming together and this is what has worked for Heroine as well. Also, as you can now see, the love story between the characters played by Kareena and me is very different."

Meanwhile he acknowledges the fact that coming together with Kareena right after Ra.One and We Are Family was nothing less than nostalgia for him.

"Kareena and I have always got along really well. We have been friends for the longest period and same is the case with me and Saif," says Arjun, "It is always a pleasure to work with her since she is a thorough professional, a good co-star and a very hard worker. For Heroine, she has indeed gone all out."

Does he have something similar to say about Randeep Hooda, the other male lead in the film, as well?

"Unfortunately, I didn't have any scenes with him right through the film's duration, save for one at a party where we didn't exchange a word. I have seen his work though and like that. He is a good actor and I would definitely want to work with him", says Arjun before signing off.