Time really flies. Just like that, Karan Johar is happily celebrating the second birthday of his twins - Roohi Johar and Yash Johar. The doting dad welcomed his twins Yash and Roohi in 2017 and they were named after Karan Johar’s parents- Yash Johar and Hiroo Johar. Today, the filmmaker is planning to throw a bash for his babies. 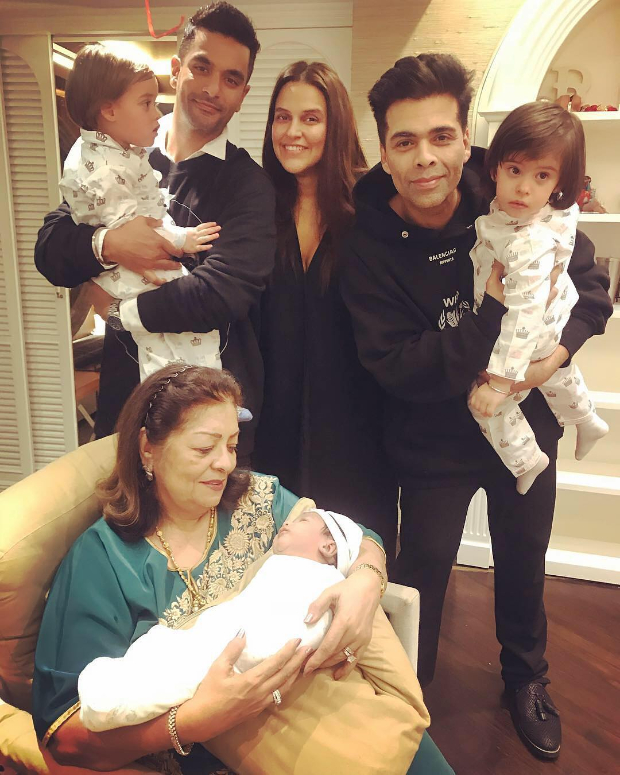 On the occasion of their second birthday, Neha Dhupia shared a lovely photo of herself with Angad Bedi visiting Karan Johar and Hiroo Johar's residence. The photo features their daughter Mehr Dhupia Bedi along with Roohi and Yash. She wrote, "#happybirthday my dearest Roohi and Yash ???? ... I still remember the first time we met and both of you screamed out loud ... “bbbbaaaaabbbbbyyyyyy”.... I may not be joining you for your birthday celebrations this time as I will be busy ???? ... but I promise I ll create havoc with you very very soon... ❤️ @mehrdhupiabedi."

Shanaya Kapoor, Sanjay Kapoor and Maheep Kapoor's teenage daughter, also shared a video via her mom's Instagram. In the video, she can be seen using the Snapchat's puppy filters on the kids. The twins seem to enjoy the fun with Shanaya.

On their second birthday, babies Roohi and Yash share cute moments with their father @karanjohar and grandmother #HirooJohar | @realbollywoodhungama

ALSO READ: Karan Johar opens up about the pros and cons of digital media