In the upcoming episode of The Kapil Sharma Show, host Kapil Sharma will be seen welcoming Raveena Tandon and Farah Khan on the show. Comedienne and actress Jamie Lever, daughter of Johny Lever will also be performing during the episode and will be mimicking Farah in front of the filmmaker in the episode. 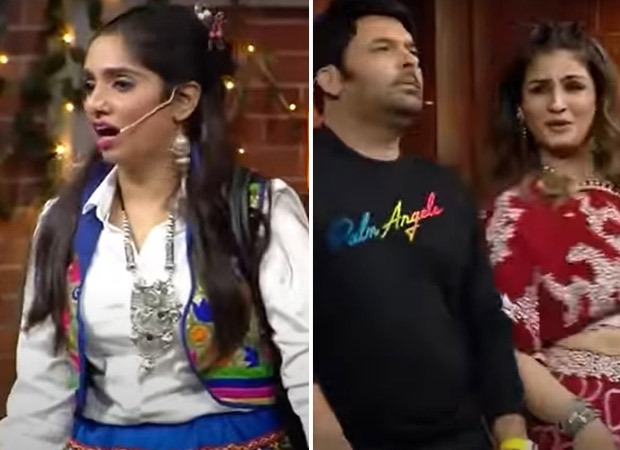 In the latest promo shared by Colors TV, Farah is seen mocking Kapil’s dancing skills. The video begins with Kapil grooving to the hit track 'Tip Tip Barsa Paani' with Raveena Tandon. Kapil asks Farah how he performed. "Yeh dance dekh ke baarish he band ho jaye yar (This dance can make the rain stop)," jokes Farah, who is also a well-known choreographer. Kapil retorts by pointing at Archana Puran Singh and says, "Mein inka dikhaun aapko dance (Do you want to see her dance then)?” Farah then replies, “Inka meine dekha hai, inko meine choreograph kiya hai kayi bar. Mera career doobte doobte bacha hai (I have seen her dance moves; I have choreographed her several times. My career was on the verge of sinking because of her)."

Later in the video, Jamie Lever is seen entering the stage and says, "Yeh mere cheela shoes and mere Jaya Prada bag (These are my Cheela shoes and my bag is from Jaya Prada), I am Bhavika Bhatt from Bhavnagar."

Kapil goes on to say that Jamie mimics everyone except her father. At his request, Jamie mimics Johny Lever. Farah then requests Jamie to mimic her. "Oh god, don't do this ya. It is a really big problem ya, I was so scared coming here today," Jamie said mimicking Farah.

Jamie recently imitated Farah on the show when Abhishek Bachchan and Chitrangda Singh graced the show to promote Bob Biswas. She was dressed as Farah and said that she wanted to make Main Hoon Na with Shah Rukh Khan but he told her Main Nahi Hoon Na.

ALSO READ: Kapil Sharma once told Ginni Chatrath that their relationship wouldn’t work out, here’s why