Madhuri Dixit has always been synonymous with dance. The actress has also been on the judging panel of many reality shows. And now, she has a role like Bahaar Begum to showcase her impeccable Kathak moves. The forthcoming film Kalank which has Madhuri in the role of a dancer will see the actress grooving to ‘Tabah Ho Gayi’ and we got a glimpse of the same recently. 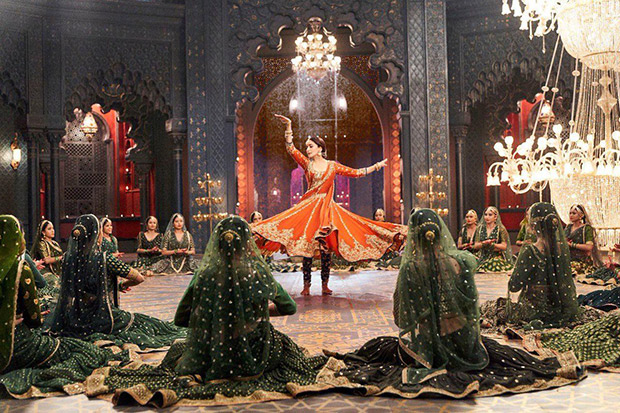 Readers would be aware that the makers of Kalank are currently promoting the same and are also releasing the songs of the film. While the title track and a few others have already been released, we will get a glimpse of ‘Tabah Ho Gayi’ tomorrow, on April 9. The song picturized on Madhuri Dixit will see her doing some Kathak steps as Bahar Begum and it may remind and her avatar may remind you of her look as Chandramukhi from Devdas. She posted about it on her Twitter handle and here’s a sneak peek into the same:

This one is very special for #BahaarBegum!!#TabahHoGaye coming soon! Stay tuned #Kalank pic.twitter.com/hOjobYI3oK

However, let us also tell you that this song is special for other reasons. It brings together the famous choreographer – dancer Jodi of Saroj Khan and Madhuri Dixit. The duo has given many dance hits in the past and yet another one may be in the pipeline. Saroj Khan had revealed in earlier reports that this would probably be the only song where the actress will be dancing in the film.

Kalank brings together the Jodi of Sanjay Dutt and Madhuri Dixit after 21 years and 90s kids are eagerly looking forward for the Khalnayak co-stars’ reunion. The film stars Varun Dhawan, Alia Bhatt, Sonakshi Sinha, Aditya Roy Kapur and Kunal Kemmu amongst others. The film, directed by Abhishek Varman, is slated to release April 17. It is produced by Karan Johar and Sajid Nadiadwala.

Also Read: Kalank: Sanjay Dutt sheds light on his role and talks about sharing the screen space with Madhuri Dixit after 21 years