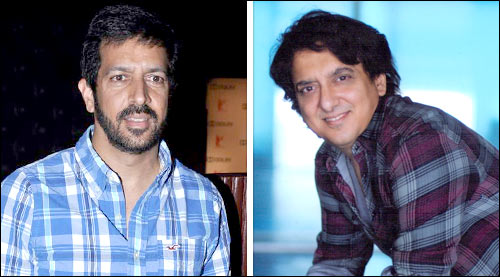 The timing couldn't have been better. Phantom is coming at the time when the film's director is at an all time high. With Bajrangi Bhaijaan breaking the lifetime record of Kick in a matter of 10 days and sprinting towards the 300 crore mark, Kabir Khan is finding an entry into an Exclusive Club which otherwise has a lonely occupant in the form of Rajkumar Hirani [PK].

Out next is Kabir's Phantom which is now gearing up for release.

A supremely exciting moment indeed for producer Sajid Nadiadwala who was waiting for an opportune moment before he brings in his Phantom. After all, with a terrific 2014 behind him which had his own Kick along with 2 States, Heropanti and Highway doing well, he certainly would have liked to see Phantom strike gold as well.

If the promo is any indication, this could pretty much turn out to be the case, and here are the reasons why.

First and foremost, the film totally belongs to the zone in which Kabir has shown his prowess before. Kabul Express, New York and Ek Tha Tiger have all dealt with terrorism in some way or the other, and Phantom pretty much lands in a familiar zone that Kabir has expertise in. He has shown the gritty side of affairs especially in Kabul Express and New York, and in that aspect, Phantom is pretty much on steroids.

Moreover, the theme is as topical as it gets. With news around terrorism and the various attacks continuing to make headlines, Phantom finds further meaning in its existence. There continues to be widespread tension in India-Pakistan relationships and while with Bajrangi Bhaijaan, Kabir had tried to create a utopian world where all is well, in Phantom he is pretty much telling things the way they are without mincing any words.

No wonder, Saif Ali Khan is clear in his message when he declares his intention of getting into the house of the evil mongers, and kills them all. For the man who has strived to succeed in a spy thriller and made attempts with the likes of Agent Vinod, the assassin act in Phantom could well prove to be redemption of sorts. If the promo is any indication, he seems to be totally convinced with what he is doing on screen.

As for Katrina Kaif, she returns to action after two back to back action flicks Bang Bang and Ek Tha Tiger. One waits to see the kind of part she has to play in Phantom, though if the source material Mumbai Avengers (the book on which the film is based) is any indication; she has a meaty role indeed.

The subject is all fine, the production values good, the costing correct (the film has been made at a budget of around Rs. 40 crores), the pitching right and the release timing perfect. All that has to be seen is that after this start, how well does Phantom bring on momentum in its promotion for the release that takes place exactly a month from now.