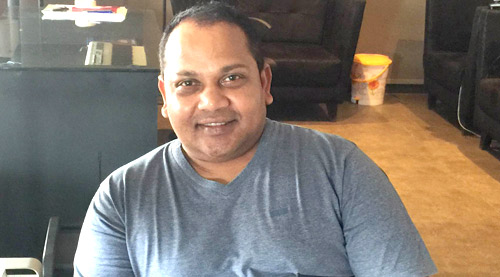 He's in a minority today: among the select few composers who know what good background music is -both by definition and by Hindi film parameters.

Phantomis the latest in the filmography of Julius Packiam, who started his film career with Kabir Khan's debut film Kabul Express nine years ago. The association has continued

through New York, Ek Tha Tiger and Bajrangi Bhaijaan. Julius also is a favourite with Aditya Chopra, for whom he has also worked on Dhoom 3, Gunday, Mardaani and more. His

other films include last year's Kick. For good measure, he even composed the song 'Bande Hain Hum Usske' in Dhoom 3.

Julius briefly states that he was in Delhi, doing ad films, television and documentaries when his college friend Kabir Khan called him to work on Kabul Express. "We-Kabir, Ali Abbas Zafar

and Victor (Vijay Krishna Acharya) are all from Kirorimal College, which is famous as Amitabh Bachchan's college!"

The composer remained in Delhi till 2009, however, when New York also came to him. "That's when I decided to move to Mumbai. Maine socha, kua (well) to yahaan hai!" he

chuckles. "My work got recognition and appreciation, and that was very gratifying. Adi-sir had liked my work enough to give me films like Dil Bole Hadippa! and Badmaash Company as

well, and now Sajid Nadiadwala had confidence in me as well, with whom I did his directorial debut, Kick."

Julius has proved that he can create a song as well, so why has he not done films or songs as a composer? "Oh, I have composed tunes, but that's a tough gamble today. A 'hit' track-record is

important in movies and even a bank of songs is not enough-you should have scored a chartbuster! I guess it is all about the right timing. I have also programmed music for other artistes when I was

in Delhi. Right now, I am happy looking after the far more demanding field of background scores! Sultan will be my next film."

What is his approach to background scores? "Candidly, I am more of a director's guy. After he tells me his vision, I try and value-add to the work I do for the film. And I do get to do things my

Julius says that every director has a different approach. "Victor was more of a hands-on guy, not so Kabir. Kabir goes more with the mood and feel."

The composer says that his greatest teacher in cinema was Aditya Chopra. "Adi is like an encyclopaedia, and what I have learnt about even my field is incredible! It's an eye-opener just to listen

to him and work with him! Especially when working on Dil Bole Hadippa! , for which he took a personal interest as the director was new."

Personally, Julius believes in a judicious supply of background music, which should suit the word "background". "Background music should not be intrusive, and my choice of instruments-Indian,

Western or a mix-depends on what is needed. I sued a lot of <>rabab in Bajrangi Bhaijaan for example in the Pakistani portions. I try and avoid making music for a talk-heavy sequence and

we can go at it full-blown when there are no dialogues happening. The treatment depends on the director."

Julius' interest in music stemmed from childhood and his film- and music-inclined family. "I had a fondness for music ever since we would watch epics like Lawrence Of Arabia or Star

'potboiler' exposure and the best education-listening! I got a good concept of rhythm, beats and melody and trained myself in guitar and keyboard."

From watching epics to composing epic scores for them has obviously been a clean transition for Julius Packiam.