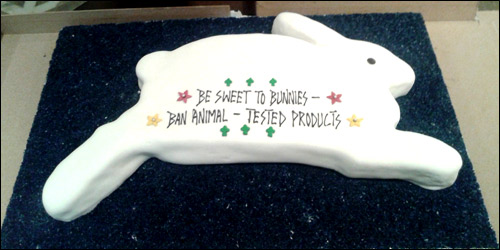 While on one hand, Jacqueline Fernandez is enjoying all the attention that the promos of her upcoming film Kick is garnering from all sides, on the other hand, she is busy doing her bit in urging everyone to kick off the practice of testing cosmetics and their ingredients on animals.

That's why she sent a bunny-shaped vegan cake Health Minister Harsh Vardhan, with the words "Be Sweet to Bunnies - Ban Animal-Tested Products" written on it. Along with the cake, she also wrote a letter to him, stating, "There was no news sweeter to my ears than when I heard that your ministry included the new rule in The Drugs and Cosmetics Rules, 1945, which bans the testing of cosmetics and their ingredients on animals in India in favour of modern, non-animal and human-relevant test methods. Along with sending the vegan cake that accompanies this letter, I am writing to request that you be sweet to bunnies again by passing the proposed ban on the import and sale of cosmetics if they or their ingredients have been tested on animals. My many compassionate friends and I were thrilled to know that your Ministry agrees that the only way to be a bunny's honey is to let bunnies live freely, as they should, and not by caging them and conducting painful tests on them for lipstick and mascara."