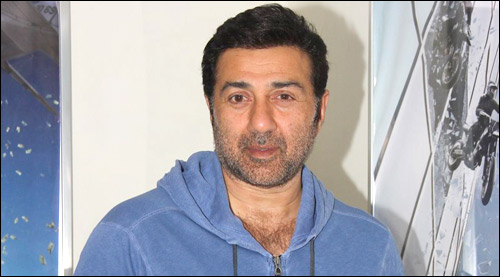 Ghayal Once Again has released and brought Sunny Deol back to the viewers. As expected, his loyal audience has given him a thumbs-up as the territories up North are

seeing some good footfalls coming the film's way, especially in the interiors. Moreover, the film has done better than his last couple of releases, while taking a reasonable opening. While the

action flick has some more distance to cover in days to come, it is still a start at the least.

We get chatting with Sunny Deol in an exclusive conversation.

How do you feel about the film's release?

Making this film has given me a lot of pleasure. The way I thought about it, the manner in which I did it - I felt good about it. Yes, I have taken such a risk, but then you have to try and

motivate yourself to bring out some good and new stuff. You have to love your job and when you do so, the results are there to be seen. If you don't love what you are doing, there is no fun,

especially when you are in a creative field.

The film has kids as the focal point.

That was the idea. When kids are together, they have some strong thoughts about things that happen around them. They want to do things that are right. It is only when you turn older that you begin

to get influenced. The idea was to bring on screen the sense of truth and righteousness.

As an actor and a performer, what was the emotional journey that you experienced while making Ghayal Once Again?

It has been a very tough and difficult journey. When you want to do everything that you intend to, you have to work really hard. You have to do things, perhaps make mistakes, and then correct it.

There are challenges that are physically as well as mentally traumatic. As an actor and a director you have to put so many different shoes. However, as I just mentioned, the key factor is to enjoy

it all while doing it. When that happens, a lot of troubles become irrelevant. Aapko lagta hai ki kuch achcha ban raha hai.

What I have understood is that we believed in something, we took the challenge and we did it. Good and bad is a different. Mistakes are made but then none of that is disappointing, as long as you

are trying. Nearly two years of my life have gone into making this film, though we shot for under 100 days.

There have been comparisons with Ghayal though.

Ghayal was larger than life and action in there was very real. That is something which is the case in Ghayal Once Again as well. This is why we got action choreographers from abroad

to work for me on the film. They relate to this kind of setting and the effort is showing on screen. The feedback too is unanimous that the action sequences have turned out really good in the film.

As you can see, they are not set pieces in there; they are a good part of the narrative. It was all required in the journey of the characters and hence makes all the more impression in the film

since all of that is relevant.

As a director, how was it to direct a film so long after Dillagi?

It is interesting for you to do different genres. Within us as a human being, we have everything - be it good, bad or ugly. What you let out at a moment has to be interesting. In our field it is so

important to stimulate all the emotions and to make different genres of films. In Ghayal Once Again, I focused on particular kind of emotions, where the idea was to get the kind of drama

which is much more prevalent in the society today.

You went all out for the promotion and marketing of the film. That must have been a new experience for you.

(Smiles) I went through all the routes which are being followed so that the film reaches out to the audience and they are aware about it. It has all become very important right now. I just feel

though that right effort should be put in a creative and a better way. That is all the more important.