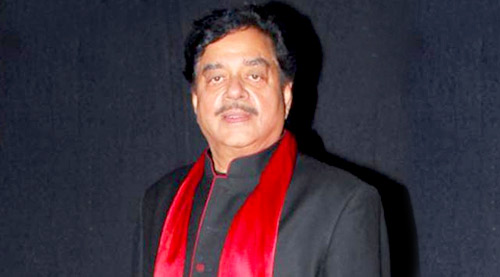 Though the BJP is an inherently conservative outfit, Shatrughan Sinha says party-members adhering to a certain code of conduct is not sign of ultra-conservatism.'

Protests the outspoken parliamentarian, "You called our party conservative. Well, if abiding by a certain moral and ethical code of decency is conservative then yes, we are that."

Shatrughan Sinha feels he is at an advantage as the first Bollywoodian in the BJP. "You must understand all these other film actors have joined the bandwagon after it was flourishing. When I came into the party it was not on a winning streak. I was one of the first to join in the BJP. The others from Bollywood decided to join the party when it was in full swing," he laughs out loud.

To expect a certain kind of decency and grace from the BJP party members is, according to Shatruji, not a sign of conservatism. "It's the sign of a party that wants to build a healthy society. And for that healthy society to flourish, we need the architects decision makers movers and shakers to follow a certain code of conduct"

The frank politician feels it's time for actors to sober down. "Gone are the days when actors could get drunk and tease and harass girls....and why just girls? They tease and harass boys as well. Of course woh bhi chalta hai. Getting into brawls, disrupting the peace. Yeh sab nahin chalega. When you are a public figure you need to guard against excesses of any kind, especially in public."

Spelling out the moral code required for parliamentarians Shatrughan Sinha says, "Certain moral guidelines have to be followed so that, even if you cannot match the profile of the party leaders, you can at least try to walk on the same side of the road as they. Achcha hona bhi zaroori hai aur achcha dikhna bhi zaroori hai. There must and should be discipline in your attitude, language thinking and behaviour...We expect our Bollywood parliamentarian to pay attention to all of this. Otherwise they will just come and go without creating a ripple."

Shatruji jumps to his one colleague Hema Malini's defense. "She is criticized even for dancing on stage abroad. That's so wrong. She is spreading the joys and lessons of Indian culture far and wide through her dancing. I don't think it is right to criticize her for this. She takes the image of the Goddess Durga and Kali to the widest number of people. She has always been at the forefront of all attempts to take our culture all over the world. To criticize her for this is very wrong."

Bringing in his pet peeve Rekha, Shatruji says, "Hema is a divine beauty in looks and her deeds. She doesn't belong to the Rekha school of thought. When Hema is not working she comes to parliament, unlike some other celebrities."

Lashing out at celebrity parliamentarians like Sachin Tendulkar for pleading inability to attend parliament, Shatrughan Sinha says sarcastically, "I wonder why they are elected in the first place. Why invite them into parliament? Probably in the hope of increasing votes. But no such thing happens. Instead the party's reputation gets damaged.


About Sachin Tedulkar been given immunity from attending parliament, the irrepressible Sinha's parting shot is, "Rekha got that immunity long back from all her admirers. Wohto sirf ayeen kaanon ki baali, hothon ki laaali aur silk ki saree ke liye. I see no other reason for her being in parliament. She came to parliament to play a heroine from silent era."