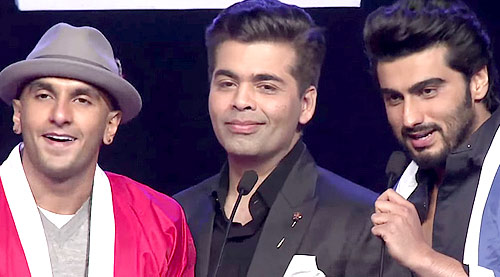 January 2015 just whizzed past and so far, Baby, starring Akshay Kumar is the only film that seems to have made an impact with a Rs.70 crore plus BO collection within the fortnight. A taut thriller, the clever screenplay by Neeraj Pandey despite a long drawn out climax, keeps you guessing. Also, this once, criss-crossing the globe is restricted to relevant places and does not seem like a pointless exercise aimed at treating the crew to a working holiday of sorts in scenic locations.


Outside of the films what has been generating a lot of excitement is the AIB Roast session that had Bollywood's young guns, Arjun Kapoor, Ranveer Singh along with Karan Johar brave an abrasive roast session as opposed to the more common grilling sessions that celebs are subjected to. And from what has surfaced on the worldwide web, they lived to tell the tale.


However, from the snatches that have gone viral, it is surprising that AIB of the irreverent, cheeky humour fame that had given people both within the media and outside of it, reason to cheer, seems to have fallen prey to the formula. Most of the exchanges -and given that this is promotional material, it would have the best parts - comprises of lewd references to actor's sex lives, who they are 'doing' and so on and after a point it sounded more like everyone trying to outdo the other in L & C (Lewd/Loud and Crude) section.


After the enjoyable and irreverent offerings like Genius of the Year video featuring Alia Bhatt, this was something of a disappointment. I am sure AIB followers and fans would beg to differ because these days, nothing works better than lewd and crude. Take the humour in our films or the jokes that are in circulation or most such-it ain't funny till the time a few Hindi cuss words have been tossed around, a few cheap jokes cracked. It's a surefire way of getting the audience to laugh and chuckle. The aforementioned or the slapstick routine - a fat man falling, the flowerpot landing on a passersby's head or some such will usually have people rolling in the aisles.


The success of films like Masti suggests that Indians are finally owning up to enjoying adult comedies. But the pity is that these newer additions to the comic genre are elbowing out wit and sophisticated humour. Even the middle-of-the road Hrishikesh Mukherjee humour which certainly wasn't highbrow is relatively rare. The fact that the very first utterance of Hindi expletives like G**** etc gets the audience, even a family audience tittering could explain the shifting trends. It may also have something to do with the evolving syntax of language. In present times when words rank second to emoticons and vocabulary is fast shrinking, L & C is perhaps the safest way to put your point across, humorously or otherwise. The era of humorists such as the celebrated cartoonist R.K Laxman is indeed a thing of the past. Good humour, rest in peace.