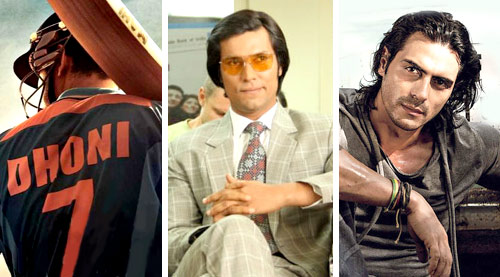 Inspiring real life stories have always been the love of writers. Time and again, biopics have proven to be crowd pullers in Bollywood. Though not all biopics are successful enough to cross the 100 crore mark, they don't fall short of nominations and worldwide appreciation. 2015, is no different when it comes to making similar generic films. If anything, they are increasing in number and more variety within this genre is being offered on the platter.


Deviating from the usual sports biopic genre, the first biopic of the year has already hit the silver screen last week and it is based on the Sanskrit scholar Shivkar Bapuji Talpade titled Hawaizaada. Historically, he is renowned for being the first man to have constructed and flown an unmanned airplane in 1895. Though the film did not fare as expected, it deserves a mention in this list for the attempt of reviving the 19th century and for giving recognition to the man, whom the world has forgotten.


Following are the list of biopics that Bollywood lovers should look forward to.

Moving ahead we come back to the sports specific films. The current captain of the Indian cricket team already has become a household name owing to the World Cup Win in 2011. Now, a film on him is being helmed by Neeraj Pandey and Sushant Singh Rajput, who will tell the rags to riches story of this heartthrob cricketer; which will cover his journey from his initial days as a kid, to his teens, to his marriage to Sakshi Singh Rawat.

Another cricketer biopic is in the offing and it is based on life of legendary cricketer Mohammad Azharuddin. Though he has been one of the best players of his times, it was his personal life that was constantly under scrutiny. From marrying Bollywood actress Sangeeta Bijlani to getting trapped into the web of match fixing, Azhar's life has been controversial. Playing his role in the film tentatively titled Azhar is Emraan Hashmi. Produced by Ekta Kapoor, the film will be directed by Anthony D'Souza.

Apart from sports, gangsters with their mysterious, rugged bad boy image become a great subject for biopics. Main Aur Charles falls under one such category. Though the story of the renowned serial killer and drug dealer Charles Shobraj will unfold in a third person manner, this Prawaal Raman directorial will trace the life of the criminal, his 'Bikini Killings, his frauds and drug dealings.

Yet another crime biopic is on famous gangster politician Arun Gawali. Played by Arjun Rampal, Daddy will give a sneak peek into the highly dangerous nexus of crime and politics in Mumbai and the controversial murder of Shiv Sena leader Kamalakar Jamsandekar. The gangster is currently serving life time imprisonment for the same.

After an unsuccessful marriage, a simple girl named Neerja Bhanot created history and became the youngest recipient of the highly honored civilian bravery award Ashok Chakra. The young PAN Am senior flight pursuer sacrificed her life during the hijack of Flight 73 while saving the lives of three children during an open fire. The biopic on this brave woman was announced recently with Sonam Kapoor in the lead.

Though there have been speculations for months about a biopic on actor Sanjay Dutt, it was only recently that Rajkumar Hirani decided to talk about it. Actor Sanjay Dutt, is the son of actress Nargis and veteran actor turned politician Sunil Dutt, and has acted in over 100 films. His controversial life which includes his addiction to drugs, his three marriages (Richa Sharma, Rhea Pillai and Manyata Dutt), an alleged criminal for illegal acquisition of arms and ammunition and his life as a prisoner is what Rajkumar Hirani is looking at in order to adapt it for the big screen. The actor's role will be played by Ranbir Kapoor.

Legendary singer Kishore Kumar is one of the most celebrated singers and is known for his light hearted films and it has been Anurag Basu's dream to showcase his life on the silver screen. Though the filmmaker has announced the film with his favourite actor Ranbir Kapoor, it seems that he is currently busy with other projects which include Jagga Jasoos.

Though there hasn't been any official confirmation, it is being said that a film is being made based on wrestler Mahavir Phogat titled Dangal which means a wrestling match. Recently, Aamir Khan was spotted in a rather different look during an event which has given rise to speculations that the actor is probably undergoing physical training to fit into the shoes of Phogat.

Even before the pre-production stage, the biopic of Gama Pehlwan or The Great Gama has run into a minuscule controversy. Two leading actors of Bollywood, John Abraham and Salman Khan, have their eyes set on this wrestler's biopic. Though the duo has been keeping mum about the film, we believe that the respective directors of the two films, Parmeet Sethi and Puneet Issar, have already started their share of recee for it.

This epic year that has been marked in the history of Indian football with golden ink is dedicated to the veteran player Mohun Bagan, who was the man behind defeating the very acclaimed and talented team of the English football club. John Abraham, being the lover of sports, decided to give football a boost in India with this film which will be directed by Shoojit Sircar. The film titled 1911 was gifted to John Abraham as a wedding gift from Sircar.

It may be an epic love story but it is surely not folklore. Bajirao was a Peshwa in the Maratha army under Chhatrapati Shahu Raje Bhonsle who falls in love with Indo-Persian maharani Mastani. Amidst wars and capturing kingdoms, Bajirao fought with the citizens under his own rule who fail to accept his marriage with a different caste/religion princess. Sanjay Leela Bhansali's magnum opus promises to capture this historic romance as it explores the life of this Peshwa.

After making the award winning biopic on the human rights activist and lawyer Shahid Azmi (Shahid), Hansal Mehta plans to bring yet another path breaking tale of a homosexual professor of Aligarh Muslim University. Condemning homosexuality under section 377 not only created an outrage among the masses but many filmmakers decided to vote against it. Hansal Mehta, who doesn't mince words, clearly maintained that the sexual orientation is a matter of choice and Aligarh is just an attempt of the filmmaker to portray the reality. Based on true incident, the film is about a professor who was suspended by the college authorities just weeks before his retirement for having sex with a rickshaw driver.


While most of these films are based on a single real life hero, there are many others which are loosely inspired on the story of a team/group who have struggled their way to success. Varun Dhawan, Shraddha Kapoor starrer ABCD 2, the second installment to Remo D'Souza's dance drama, is based on the life of Suresh Mukund and Vernon Montero's dance troupe which created a place for itself in World Hip-Hop championship.


But this is not the end of the biopic genre! Filmmakers are constantly on a lookout for real life incidents which can be captured on celluloid and many more biopics are still in the scripting stage. In fact, it has been learnt that Vidya Balan, who dared to portray the role of sensuous item girl Silk Smitha on the big screen, has been approached for two biopics - on Pakistani Prime Minister Benazir Bhutto and veteran actress Suchitra Sen. So let's wait and watch until the next biopic in line is announced!