Akshay Kumar has over years emerged as one of the most bankable celebrities in Bollywood. In fact, filmmakers are lining up to shell out top bucks to rope in Akshay for their film. But what exactly makers Khiladi Kumar so popular, despite the fact that the actor features multiple releases each year? Well, Bollywood Hungama decided to take a look at the actor recent box office collections to gain a clear picture. In this Infographic we take a look at Akshay Kumar’s box office performance in the recent past. 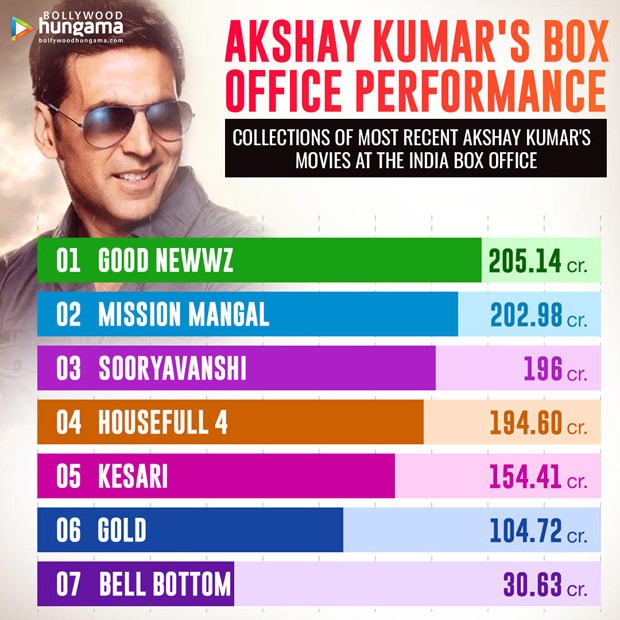 Mission Mangal: A film based on India’s Mars mission, the film boasted of an immensely patriotic theme, one which Akshay Kumar has featured in a number of his film. With great performances, and a gripping story, the film raked in Rs. 202.98 cr.

Sooryavanshi: Released in 2021, Sooryavanshi which was the first big ticket released to hit screens post the second lockdown carried the immense weight of the industry’s expectations. Living up to the same, the Akshay Kumar action entertainer was welcomed with open arms by the critics and audience alike. In fact, the film managed to collect Rs. 196 cr.

Housefull 4: The multi starrer Housefull 4 directed by Farhad Samji that released in 2019 managed to gain a fan following of its own. An out and out comedy the film drew in Rs. 194.60 cr at the box office. Interestingly, Akshay Kumar’s role as Bala became quite a social media trend.

Kesari: Keeping in line with Kumar’s penchant for featuring in films with a patriotic sentiment was the 2019 release Kesari. Playing the role of Havildar Ishar Singh, a soldier in the British Indian Army, leads 21 Sikh soldiers in a fight against 10,000 Pashtun invaders, Akshay’s performance was the talk of the town. Thanks to this the film drew in Rs. 154.41 cr.

Gold: The 2018 film Gold which was based on India’s first hockey win at the 1984 Olympics saw Kumar don the role of Tapan Das. The immensely sentimental film drew in Rs. 104.72 cr at the box office.

BellBottom: Akshay Kumar’s lowest grosser in the recent past; Bellbottom collected just Rs. 30.63 cr. However, this low key collection was due to the covid-19 pandemic sending nations into lockdown. Had the film released during normal times, predictions state that it would likely have grossed over Rs. 100 cr.

Interestingly, from seven films listed in Akshay Kumar recent past, six films have made it past the Rs. 100 cr mark, of which two have crossed Rs. 200 cr. Averaging nearly Rs. 155 cr per release Akshay Kumar has time and again proved his money spinning capabilities at the box office. Given this track record it is no wonder that he is termed as the most bankable star today.

Also Read: Infographic: Baahubali 2 to Pushpa – Here are the Top 5 Hindi dubbed South films that have made it big at the India box office