India cheered for the men's hockey team of India as they clinched the first Olympic medal in hockey in 41 years on August 5. Team India defeated Germany by 5-4 points to win the medal at Tokyo Olympics. Soon after their historic win, celebrities from all across congratulated them. 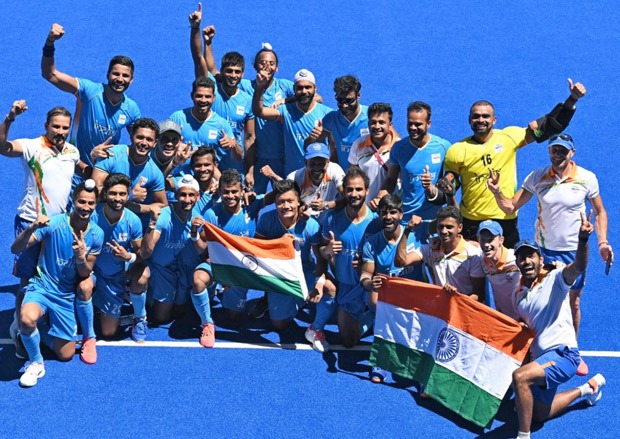 Shah Rukh Khan, Akshay Kumar, Farhan Akhtar among others took to their respective social media to celebrate the glorious victory.

Wow!! Indian Men’s Hockey Team Congratulations. Resilience and skill at its peak. What an exciting match.

Shining bright with all the bronze. Spectacular victory at the #Olympics. Kudos to the Indian Men's Hockey Team for bringing home the medal after 41 years!@TheHockeyIndia @WeAreTeamIndia #Cheer4India #Tokyo2020 pic.twitter.com/cScxwL88gR

After 41 years, our Indian men’s hockey team script history by bringing home a medal. I congratulate our guys who have reignited our national sport with this victory. #Tokyo2020 pic.twitter.com/bxiI9PY8TL

So proud of #teamIndia for showing exemplary fighting spirit and bringing in our 4th medal .. super stuff. #Tokyo2020 #Hockey

So proud of the Indian Men’s Hockey Team! This is HISTORIC! ???? #IND @Olympics pic.twitter.com/TPogXS6wib

Congratulations Indian Men's hockey team for bagging bronze medal ???? at the #Olympics beating Germany ! You have made the entire nation proud ! ???????? Special mention to #Sreejesh for the amazing save In the crucial moment of the game ????#Tokyo2020 #Hockey #Cheer4India pic.twitter.com/9qqPmb7rf1

Congratulations Team India on rewriting history! An Olympic medal after 41 years! What a match, what a comeback! #Tokyo2020 pic.twitter.com/3mdym3Cupa