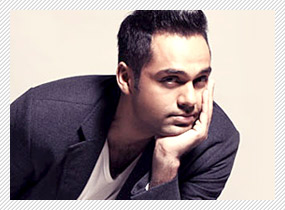 Turning into a producer has made Abhay Deol all the more candid than ever before. Known for his blunt and heartfelt speech that has been often misunderstood as being arrogant, Abhay is calling spade a spade. From revolting against the norms to even cracking a joke at his expense, Abhay is doing it all en route to release of his debut production One By Two.

One By Two is your first true-blue romcom, almost a decade after Socha Na Tha (2005). That must be special, right?
Yes indeed. What happened was that I called (director) Devika (Bhagat) home as I had certain ideas that I wanted to share. She told me that she too had an idea. So before I could start, she ended up giving me a narration. I thought that her idea was better than mine and she said - 'Yeah, I know that' (laughs). So she took some elements from my idea, put some of her own in there and this is how One By Two moved from inception to development. Of course the core concept was her own and that's good because it was complete, unlike mine which was still under development.

You are not being a hero-hero in One By Two even though you could have done by virtue of being a producer. A conscious call?
I guess we have had a hero worshipping culture for way too long now. We keep showing that a hero and heroine are better than a regular person. Now that is not being real, we just project it as real. That's unfair. See, what makes a movie entertaining? Situations. It is best to have characters that confirm to you in real life as well. Entertainment quotient comes from the plot while empathy comes from real characters.

So in real life, just like the character you are playing in the film, do you feel liberated now?
It is all about the mental space that we are. It is either something that we decide for ourselves or perhaps an external stimulus that can act as a catalyst to liberate us. I can share with you something personal about myself. There was a time when I was too pressed about not having enough support. I looked at others who had that advantage and felt sorry for myself. Fortunately, I was still working with new talent. I focused on the positives and negative and automatically liberation happened. It is just that someone may reach destination before you and then you may reach that point a little later in life.

One By Two is about a youngster trapped in a box. Ever thought that in your own professional life you, you have been boxed into certain roles and parameters?
Well, let me put it this way that I was put into a box (laughs). I am into an alternative box here. I was being tagged as this face of independent cinema and this whole movement and all for way too long. Don't take me wrong though, in a way I was happy to be doing that. I was one of the few people doing that and hence when placed in the box, I humbly accepted that as long I was happy. However, it isn't as if I want to be boxed in anything in particular. I want to be moving freely and not caged in there. So tomorrow if I do something out and out commercial then that would be out of the box for me (laughs).


Meanwhile you have reached a good point in your life personally, what with real life partner Preeti Desai in the film. Wasn't it weird to be in a relationship and still play these perfect strangers in the film?
(Laughs) It could have been weird even if we were not playing strangers. After all, we were not playing Abhay and Preeti but two altogether different characters. Personally for me that was being weird enough!

Preeti is someone who has just been seen once before, and that too in a relatively smaller part, in Shor In The City. So is One by Two again a one off film that she is doing?
I hope this time around it is for the keeps (smiles). She has full plans to work as an actress in time to come.

More Pages: One By Two Box Office Collection , One By Two Movie Review

Tags : Abhay Deol, One By Two