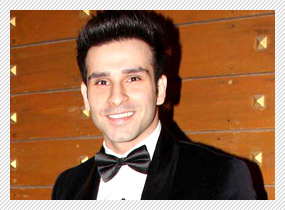 Girish Kumar, who made a good debut with Ramaiya Vastavaiya last year, has just turned 25. While most would have expected that on this special day he would throw a bash and socialize primarily with those from the industry, Girish decided to spend his birthday with those who have been close to him since forever.


Right from the moment his friends came together and brought in his birthday at mid-night, the celebrations were on for Girish who had made elaborate plans to hang out with his childhood buddies right through the day.


"Well, these are my friends who have been with me in thick and thin. There is an entire year to be spent in the world of movies. However birthdays are meant just for my closest pals and me. Incidentally none of them belongs to filmy families. This way, we can talk about anything and everything without looking over our shoulders," says Girish in a mischievous tone.


While he had a day long boisterous plan set with his friends, it was a relatively quiet evening with his parents and other immediate family members.


So is there a special gift awaiting him from dad Kumar Taurani this year; perhaps another film?


He smiles, "Well, I think my father has given me so much in my life. He keeps telling me that God has given hands to everyone. There are some whose hands are with palms open so that they can receive. On the other hand, there are some whose hands are always open to give. My father is a giver. The kind of love and respect that he ensured for me with Ramaiya Vastavaiya is something that cannot be measured. I couldn't have asked for more."


No wonder, even though he has his home banner TIPS always there to give him more films in quick succession, the idea is for Girish to attract filmmakers from outside as well. There are scripts waiting for him in house as well and the choice is open for him to get started at any given point in time. However, Tauranis are exploring outside opportunities too in case there is something exciting on the anvil. More so, since the film is creating quite some buzz on satellite, courtesy its premier fetching best TRPs of 2013 after Chennai Express and re-runs as of January earning some fantastic numbers too.


"And so I am told," beams the birthday boy, "I guess for a newcomer it is always a positive sign to see his first ever film fetch some heart-warming response on a continuous basis, isn't it?"