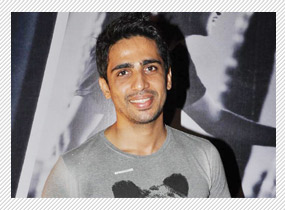 The growing success of the Ranveer-Deepika starrer Goliyon Ki Rasleela Ram-Leela despite a lot of controversies has surely left its actors thrilled. Rejoicing the victory, Gulshan Devaiah, the bad guy in this Indian adaptation of Romeo-Juliet says, "It's really overwhelming to see this kind of response. People send me messages on Twitter and Facebook. Like the other day when I went to the gym, people there were like 'Hey you were really cool man.' The feeling is so complicatedâ€¦ it's as big as a Tsunami. Kya kahein, yeh sab Ram ki Leela hai."


Starting his career with unconventional films like Shaitaan and Hate Story, Gulshan Devaiah breaks the trend with a commercial film like Goliyon ki Rasleela Ram-Leela where he plays the notorious villain. Playing the menacing Bhavani reveals yet another grey shade of Gulshan, just like his previous hits. Is that a mere coincidence? "I like to do things that are slightly out of the box or teda. I want to try and take up roles which are unlike me. Mostly the understanding is that there is a hero who is always shining and there is a villain but there is nothing in between. We all are imperfect. The difference is some people have darker shades of grey and vice versa. In this film, Bhavani's negativity is highlighted. And as I said before, I like exploring the different phases of human psychology which happen only in such roles."


The actor who cannot stop gushing about the success of his latest release revealed that if not for his friends and family, he would have never agreed for the film. "I found it really difficult to say a 'yes' to Bhavani. It was my manager Shobha Sant and my wife Kalliroi who convinced me to take up this offer." But his obstacles increased after he joined hands with the Ram Leela team. This urban lad turning into a Gujju gaon ka chora was no cakewalk. "Learning the flavor and accent of Gujarati was a little difficult. I went for a workshop with Homi Wadia (who plays Ranveer's father) for a couple of days. And of course learnt a lot from Supriya Pathak! Being around her really helped me understand the rhythm of Gujarati since she is so experienced. Also, I spoke in a flatter voice to give the villainous feel which helped me get the pronunciations better."


Now with a success like that, Gulshan is bound to be flooded with offers and a few may even involve him playing the role of a hero. But the actor says that he doesn't want to be unrealistic and would always choose to remain unconventional even in mainstream cinema. "To be honest I would love to be a hero but is it practical to do it? No. I cannot dance like Hrithik nor fight like Shahid. I love watching their films. I loved Ranveer's role in my film but I cannot do it because it won't suit me. I don't want to confuse the audience because it's foolish of me to compete with these people who are well versed in it. I want to make my own niche."


But that doesn't mean Gulshan is restrictive about his roles. Moving away from his forte and exploring genres has always been one of his dreams and his future projects reflect just that. "I have completed a comedy film recently with Radhika Apte titled Hunterr directed by Harshvardhan Kulkarni which is a slice of life kind of film. And I am also going to start shooting for a thriller called Cabaret to be produced by Pooja Bhatt. Here, I'll play a role with lighter shades of grey, but surely not a villain."


Very few people are aware of the fact that Gulshan Devaiah has had a connection with the world of acting before as a theatre artist. But cinema for him is passion. The actor is in love with every aspect of filmmaking. Ask him if theatre has taken a back seat and he immediately agrees to it. "I love cinema. I love the process of filmmaking. I just love being on the set. I have taken a temporary retirement from theatre. And I would like to go back to it only when I get the urge to do it again. Jab woh andhar ki awaaz kahegi ki to go back to the stage."