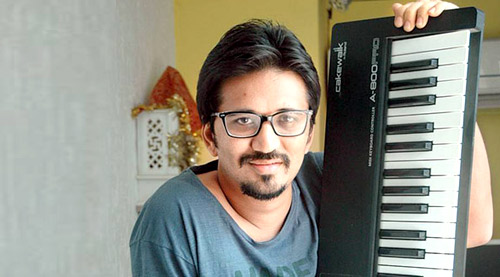 his rigid resolve to only work on projects that inspire him, Trivedi is undoubtedly a class apart in the music business. Subhash K. Jha unravels the mystery of Trivedi's sounds.

In the music of Bombay Velvet you seem to seek and find the sound of an era gone-by. But at the same time it's a sound that connects with the youth?

You're right. That's what I've attempted in Bombay Velvet. I've tried to merge sounds from the American legends with those of our own legends, like O P Nayyar Saab, S D Burman Saab, Geeta

Dutt and Asha Bhosleâ€¦.the whole club culture in popular music. Jazz as a genre has never been explored. I had to remain as authentic as possible to the genre.

How long did it take you put together the music of Bombay Velvet?

where I'd have to go into the jazz territory. From that time when Anurag put the jazz keeda in my mind I've been learning assimilating and absorbing. I keep learning while I create.

You are known to be very selective about your projects?

If I don't connect with the director or the theme I say no to the project. If I take on something I don't believe in, it would be unfair to the filmmaker and his project. So I try to avoid what I

What do you feel about the quality of music in our cinema today?

I don't listen to much of what is going on. I do hear Bollywood songs playing at clubs and on television. But honestly, it does nothing to me. I don't pay attention to the current songs.

Do you think there is still space for music in our cinema?

A lot! I don't know why we are not tapping the full potential of music and songs in our films. I am doing my best. As for other composers, I can't talk for them.

Why do you think the lip-sync sound has gone out of fashion?

If you look at the history of our music from the 1930s all the best songs were lip-synced. To this day unless a hero or heroine lip-syncs a song we don't take it seriously.

So what is the way out for film songs?

If it's not lip-sync it is considered a background cinema. Contemporary songs drive the narrative forward. In a sensitive realistic film like Udaan it'd have looked really awkward and weird.

Sensibilities have changed. You can't show your characters singing unless she's a singer like Anushka in Bombay Velvet.

Do you feel you've to compromise your creativity to fit into the current trends?

I love doing what I do. But yes it's a struggle to remain true to myself.

Tell me about your other assignments.

There's Vikas Bahl's Shandaar and Abhishek Kapoor's Fitoor. Shandaar is a complete change of pace of me since it's a film about a destination wedding. I had great fun doing the music.

We have great expectations from you?

Ha ha. Yes, it's based on Charles Dickens' Great Expectations. I am as proud of Fitoor as I am of Bombay Velvet. Lyricist Swanand Kirkire and I have worked really hard on it. We've

spent a year on it.

Considering the average listener's attention-span, is it worth your while?

I am lucky to be working with filmmakers like Vikas Bahl and Anurag Kashyap. I'm proud of what we've achieved in Bombay Velvet.