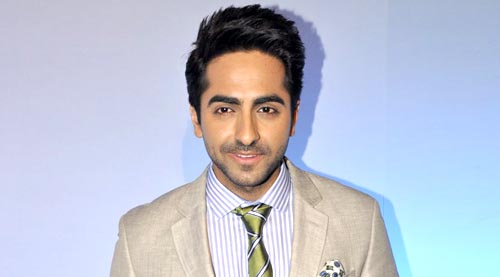 The rumours insist that, for the climax of Dum Laga Ke Haisha, Ayushmann Khurrana couldn't carry his healthy co-star through the victory run, and had to get the help of a body double.

But, Ayushmann vehemently denies this. "I may look frail. But I've sturdy shoulders. There were body doubles for both, me and my co-star Bhumi Pedneker. I am proud to say my body-double never had to be used."

Ayushmann Khurrana went through a prolonged period of training on how to carry his co-star during the run. "My trainer taught me about the right posture while carrying Bhumi. He taught me that it isn't about the weight, but the way you carry the weight."

It wasn't the heavy run that was a burden. It was getting the emotions of the character that was the tough part. "Here was this man who never smiled until the end. And I am the kind of guy who always keeps smiling. I had to play this very bitter disappointed guy. That isn't me at all."

As the popularity of Ayushmann Khurrana's latest film Dum Laga Ke Haisha (DLKH) grows with every passing week, the actor has much reason to be relieved. Ayushmann went through a rough patch when the movies he picked crashed one after another.

Sighs the actor, "I guess it's all destiny. I put as much of myself into DLKH as I did in Hawaaizada. One worked, the other didn't. As Adi Sir (the DLKH producer) said, 'I haven't seen any actor's fortunes change so dramatically in just one month."

From almost being written off to being hailed for his deep understanding of his character's disturbed embittered inner world in DLKH, Ayushmann knows he has come into the light from the darkness. "But, nothing has changed. I was signing films very carefully earlier. I am still doing the same. That is one advice from my two mentors Adi Sir and Shoojit Sircar, which I've taken very seriously. Never rush into doing roles, for whatever reason."

Even after the unexpected success of DLKH, Ayushmann is only working on one film. "It's Shoojit Sir's Agra Ka Dabra. We are still working on the script, fine-tuning it. I am very excited to be working with Shoojit again. My journey started with him in Vicky Donor. We shouldn't forget. That too was an edgy, completely out of the box film, like DLKH. I guess the unconventional works not only for me, but for the audiences as well."

The best compliment that Ayushmann has received for DLKH came from his father. "He wanted to know where and how a Punjabi boy like me mastered that accent from Uttar Pradesh. My father is a big Dilip Kumar fan. He told me I reminded him of Dilip Kumar in the film Daag."

For this unassuming actor, the future looks bright. "It was bleak before DLKH. My films were not working. It's all changed now. That's destiny for you."