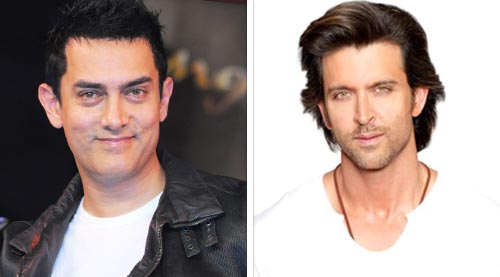 Last year, films featuring Aamir Khan (PK) and Hrithik Roshan (Bang Bang) together collected in excess of 500 crore at the Box Office. However, in year 2015, neither of two would have a single release to their name. Both have finalized their next (Dangal and Mohenjo Daro respectively) for 2016. However, at least for the current year, industry is set to lose an opportunity of minting at least Rs.500 crores at the ticket windows due to absence of two notable saleable names.

We reached out to certain prominent members from trade and exhibitors to understand what this truly means for Bollywood!

Atul Mohan [Trade Expert] - It is definitely a big loss in 2015 for the industry. But, the same will be compensated in 2016, as then the box-office will be bigger in terms of money. Also, fans who will miss them for more than a year, will throng to the cinema halls in big attendance.

Rajesh Thadani [Distributor] - With Aamir Khan and Hrithik Roshan not having a release this year, it would impact the overall Box Office report for the year. We can only hope that this year the smaller films fare well and cross the barriers to fill this void.

Akshaye Rathi [Film exhibitor and distributor] - The gradual shift that our industry is undergoing from being star driven to being content driven is a factor that will cushion us from the impact of the absence of these superstars from the slate of 2015. Of late, there have been a lot of films that did not boast of 'A' league superstars and still the show went on reasonably well. Besides, I am sure the two films featuring Salman Khan (Bajrangi Bhaijaan, Prem Ratan Dhan Payo), one starring Shahrukh Khan (Fan), three with Akshay Kumar (Gabbar Is Back, Brothers, Singh Is Bling) and three with Ranbir Kapoor (Bombay Velvet, Jagga Jasoos, Tamasha) will, more than make up for this!

Prashant Solanki Trade [General Manager, Cine Park Cinemas Pvt. Ltd.] - I don't think there will be any set back in terms of collections, but certainly we will miss their releases. Eventually, everything depends upon content of a film. Actually, I am more excited about films doing well with new breed of stars. More films should surprise the industry, just like Ek Villian, Humpty Sharma Ki Dulhaniya, Yaariyan etc. did last year. Also, I am upbeat about Hollywood films doing very well in 2015 as they will particularly benefit multiplexes.

Harsh Jain [Film distributor and exhibitor - Sanman Group] - Yes, 2015 looks like a not-so-happening year, as otherwise, Hrithik Roshan and Aamir Khan have big holidays reserved for them. But then there is an opposite side to it also. You never know how and when we can have the younger stars - that have films releasing this year - give a surprise. Don't forget that Ranbir Kapoor, Ranveer Singh and Varun Dhawan are waiting to strike.

Girish Johar [Distributor and film business analyst] - It isn't that if there are no releases of Aamir and Hrithik, then Box Office will run dry. Our audiences are very smart and they will definitely not miss a good film, be it of any stars. In fact, Akshay has three films, Salman has two, and Ranbir has three, while Shahid, Emraan, Varun, Arjun, Sidharth and a few others have good films lined up as well. Also, top female lead films are lined up too with Aishwarya Rai Bachchan (Jazbaa) and Deepika Padukone (Piku) bringing some of their own. I am very positive that they will set new Box Office and quality standards worldwide. We have loads of content to look forward to in 2015.