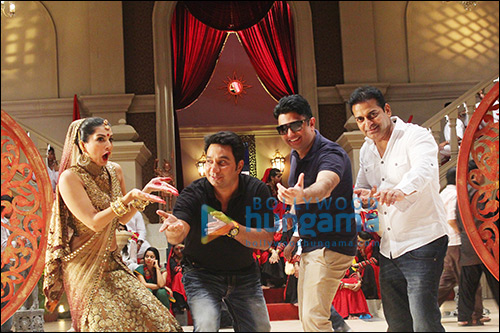 Sunny Leone's upcoming film Ek Paheli Leela boasts of some peppy tracks including 'Desi Look' and 'Saiyaan Superstar' where we spotted the actress doing some sensuous moves. But the bubbly actress wasn't the only one to shake the leg during rehearsals on the sets.

During the shoot of 'Saiyaan Superstar', producer Bhushan Kumar visited the sets, which was constructed in Mumbai, to see how the song is looking and to have a meeting with the other producer and choreographer Ahmed Khan. During a break, when the producers were having an important discussion, Sunny Leone made the three dance to the tunes of the song. She taught them some steps and made them do a small jig which was captured by the photographer on the set. The on lookers there couldn't hold back and supported Sunny. Ahmed being the choreographer was a pro but Bhushan was having fun while shaking his legs.

Produced by T-Series and Paperdoll Entertainment and directed by Bobby Khan, Ek Paheli Leela also stars Mohit Ahlawat, Rajniesh Duggal and Jay Bhanushali and it is all set to release on April 10.