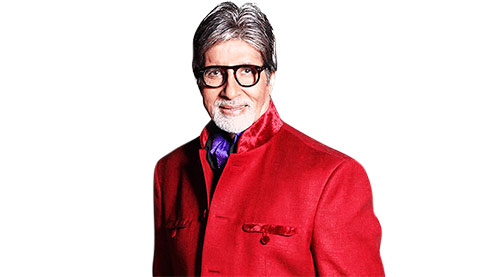 Talking about Rs. 100 Crore Club films, another 'Club 100' that is being planned with you is 102 Not Out by Umesh Shukla. Now this one sounds like an interesting film by the very title itself. Can you please elaborate a little on the film?

I am delighted with your optimism, but the title does not in any manner reflect, its box office connotations. It is a film about a Father-Son relationship - the Father is 102 years old and the Son, perhaps in his 80's. It is still to start. All I can say for the moment is that we are working on it.

Abhishek Bachchan too is doing a film with Umesh in the firm of All Is Well. With three back to back biggies behind him (Happy New Year, Dhoom 3, Bol Bachchan), you must be thrilled that he is now indeed getting his due, isn't it?

On the other hand Aishwarya Rai Bachchan too is making waves with her Jazbaa catching on in a big way in Cannes. This makes for a happy, content and happening Bachchan family, isn't it?

It does, but we were always a happy and content family! Happening..? That the others would have to decide!

You did have an obstacle though earlier this year in the form of Shamitabh. Were you able to see only in retrospect that what went wrong with it, or you actually had an inkling of something going haywire, when you were putting together the final cut?

Shamitabh was not an obstacle! It was not something that appears as a hurdle in a Steeple Chase athletic track, just before you encounter the water tank! No. It was a film that I thoroughly enjoyed working in, and that was thoroughly not enjoyed at the box office! Period. And if we had any inkling of things going haywire during the process of the final cut of the film, would we really have ignored it? I assume not!

If I am allowed to put forth my view, I personally felt that as long as the story was about the banner between you and Dhanush, it was fun, but whenever the focus shifted entirely on your monologue, especially towards the end, it appears that Balki was a little carried away with the subject in hand as well as thrill of seeing you as a performer on screen. It seemed like he just couldn't have enough of you. How do you look at that?

That could be a very strong possibility. Which in a way justifies what I have stated earlier of the 'gusty torrents' that washed away all the expected qualities of my presence, by the new generation. The times of giving me concentrated monologues and time consuming footages are over. They have become detrimental to the content of the film.

How is Bejoy Nambiar handling the thrill of having you on board for Wazir? As a young upcoming filmmaker, how has he turned out as a communicator with you?

You should ask him. I found him to be very sound in his craft!

In the film, your legs are amputated. Now isn't that draining you physically?

Meanwhile, on a lighter note, don't interviews like this drain you mentally?

No ... most certainly not! This is my third for the day, including a battery of press questioning at the launch of my new film teaser 'WAZIR', earlier, and the night (11 PM) is still young for I have three more to go!!

And what is it that drains you out emotionally? Can't assume that would be because of the characters you play as you have been managing the variety for over four decades now. So what is it that makes you sometimes want to shut yourselves away from all the madness around you and retire in solitude, even if for a little while?

I never do ... now! I did it in the mid 90's at great personal creative loss. That was a mistake. I should never have done that. I thrive now on working without the dreams of solitude and retirement. And I just love this madness!!