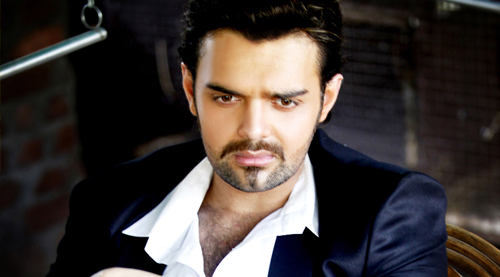 The big day has arrived for Mahaakshay (Mimoh) Chakraborty. With Ishqedarriyaan, he is now ready to debut in a romantic avtar. We get into a quick tete-a-tete.

Looks like Ishqedarriyaan is a classy love story in the offering, right?

We never targeted a rich or a classy or an exquisite film; we were focusing on the script. If the script demanded the characters to wear certain clothes or react in a certain way, then that's what

you see in the promo and the songs. You would see richness in the film as we chose the best locations. We shot in America, Georgia, Himachal and many virgin territories. Cinema needs rich visuals;

we need to please the eyes. Since ours is a romantic film, we automatically got the right look.

In the film your co-star is Evelyn Sharma. How does that pairing work out?

The mastermind for that was our producer Rajesh Banga. He insisted that the film has me and Evelyn. We did wonder that since ours is a new pairing, whether that would do justice to the film.

However, Rajesh was sure. Evelyn stands for glamour and in the film she is a very simple girl with a simple background. Now that works because in real life too, she comes from a simple family that

stays in a village in Germany. For Rajesh to extract the simplicity factor out of us was the highlight of making the film. Since Evelyn's character in the film is very bhola-bhala, it has come out

Before Ishqedarriyaan, did you take a sabbatical of two years (since the release of Enemmy)?

Well, if you see it that way, making Ishqedarriyaan has been a one and a half years process from pre-production to now, so I was busy right throughout. I have been associated with the film

for long; it has been a beautiful journey for me. Thankfully, in my personal life, I don't have to do everything and anything. I am fending well for myself.

Still, after Haunted (which was a hit), one would have expected that you would become all the more prolific in films. Why did you decide to go slow even after that?

The point was that as an actor when you give a Rs. 40 crore hit as a solo hero, you want to be very picky. What you do next will reflect in your career. One needs to strike a chord. As an actor

too, you want to feel happy with what you are doing. So yes, I am being picky because for that person who walks into theater to watch my film, I have to give him something with which he is

entertained. The film which I do must be worthwhile as I can't let people down. At the end of the day, I am a public servant. I have to be extra precautions about my work.

So all precautions were well taken care of during Ishqedarriyaan?

(Smiles) Well, when people ask me about the film or what is to look forward to, I tell them that it has wonderful songs, it has been shot very beautifully, it has a very strong technical crew and

the most important thing is that it has a wonderful story. The film is based on love and that is something which is the most common element for mankind. Everyone goes through love, everyone wants

people fall in love with our film too.