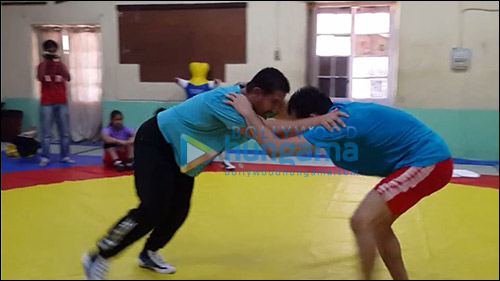 Though the year is disappointing for Aamir Khan fans considering that the actor doesn't have a release in 2015, we all are aware that the superstar is busy preparing for his upcoming film Dangal. Based on the real life of the wrestler Mahavir Singh, the film will have Aamir Khan playing the protagonist.


In order to play the role of a wrestler with perfection, Aamir Khan is currently learning the game and has now learnt a new move called 'Dhobi Pachad'. Here's a glimpse of Aamir Khan mastering the skill. Though now he can perform the move in one ago, we hear that Aamir had to undergo some intense preparation to get this right. However, the superstar was determined and practiced this particular move for about 10 days and it was a moment of pride when he could finally perform it well. In fact, the actor was also excited about the fact that he got someone to capture him performing the move and he has even been showing it to everyone on his phone.

The spokesperson confirmed the news saying, "Aamir is enjoying the process of learning wrestling."


Aamir Khan has even beefed up his physique and is on a strict diet in order to get into the role of a wrestler. Dangal also traces the journey of wrestler Mahavir's Singh's daughters and their relation with their father. While many actresses have auditioned for the role, it is being said that newbies Fatima Shaikh, a photographer and Sanya Malhotra, a trained ballet dancer are being considered for the role.


Produced by Disney Studio India and directed by Nitesh Tiwari, Dangal is slated to release on December 23, 2016.